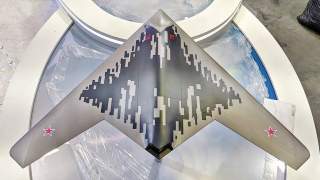 Key point: Stealth drones are a major new technology that every major power is racing to develop.

The Russian Defense Ministry announced that the joint flight took place earlier this week: “As part of the ongoing test program, the Okhotnik drone performed a flight in the automated mode in its full configuration, entering the airborne alert area.” The Defense Ministry statement was accompanied by a one-minute clip of a Su-57 and B-2 shaped Okhotnik drone flying side-by-side in several close-up shots. Though the video itself is fairly nondescript, the statement sheds further light on the purpose of the flight: the 30-minute exercise was intended to “broaden the [Su-57] fighter’s radar coverage and to provide target acquisition for employing air-launched weapons.”

A defense industry source has told TASS state news that this is the first of several, increasingly complex exercises meant to test and refine Okhotnik’s ability to execute tasks in a “partially autonomous mode.” Sukhoi engineers are also reportedly evaluating the feasibility of fully autonomous flight routines from takeoff to landing.

Formally unveiled at the ARMY-2019 exhibition held outside Moscow earlier this summer,  Russian Deputy Prime Minister Yuri Borisov told Russian state news that the first, serially-produced S-70 units will enter service in 2025. The Okhotnik drone is being designed with a substantial stealth component, featuring composite surfaces coated with radar-absorbent materials. At the same time, it boasts a jet fighter-grade AL-31F or AL-41F engine that supports a maximum speed of up to 1,000 km/h.

These stealth and speed features are necessary preconditions for Okhotnik to be able to travel safely alongside the Su-57. However, what makes the S-70 such a potent “loyal wingman” drone is the way that its versatile avionics suite can complement the Su-57’s powerful raw performance capabilities. As previously discussed by The National Interest, the Su-57 trades certain cutting-edge avionics features for unparalleled air superiority performance.

There are several ways that Okhotnik can mitigate the adverse tradeoffs implicit in the Su-57’s design. Okhotnik feeds the Su-57 pilot information in real-time to generate a dynamic picture of the battlefield, functioning as an automated data processing center in the spirit of the F-35’s sensor fusion doctrine. In particular, the Su-57 can receive targeting information from Okhotnik to cue its very long-range R-37 missiles while remaining far outside hostile airspace. Okhotnik’s armament suite is currently unknown, but the UAV possesses two internal weapon bays that Russian defense commentators speculate can be used to carry out low-risk preemptive strikes against missile defense systems. The two aircraft will be able to communicate by satellite link, thus eliminating range and line-of-sight limitations.

Deputy Prime Minister Borisov’s office maintains that the S-70 is not so much a finished product as a “universal baseline platform,” to be tweaked and expanded over the course of its serial production. What is clear, however, is that the Russian defense sector is aggressively pursuing Su-57 integration as one of Okhotnik’s core design pillars.

Mark Episkopos is a frequent contributor to The National Interest and serves as research assistant at the Center for the National Interest. Mark is also a PhD student in History at American University. This first appeared in September 2019.