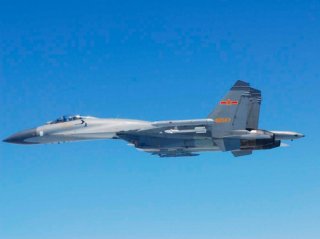 Nigh-unmatched in its versatility, the Sukhoi Su-27 (NATO reporting name Flanker) has distinguished itself as one of the most successful Soviet fighter designs of the late Cold War era.

The plane that would eventually become the Su-27 grew out of the Soviet PFI, Russian for the "Prospective Frontline Fighter,” program. The PFI’s basic requirement was for a flexible and agile aircraft to keep pace with fourth-generation U.S. fighters like the F-14 Tomcat and F-15 Eagle. The PFI was later split into two separate programs, one of which produced the relatively lightweight and short-range Mikoyan MiG-29. The other resulted in the heavier T-10, which was slowly molded into the Soviet analog to the F-15. The serial version of the Flanker emerged from what was a winding and tortured development phase. Early testing revealed serious design flaws, resulting in a series of crashes that culminated with a pilot’s death in 1981. The Su-27 was formally introduced in 1985, making it one of the last major fourth-generation fighters of the Cold War, but it would take several more years for the fighter to be mass-produced in militarily meaningful numbers.

However, the end result was well worth the wait. Powered by two Saturn AL-31F afterburning turbofan engines, the Flanker reaches speeds of up to Mach 2.35 and has an operational range of around 3,500 km. The Flanker features a payload capacity of up to 6,000 kg, spread across twelve hardpoints. It boasts Vympel R-27 medium-range and R-73 short-range air-to-air missiles, which, combined with its relative maneuverability, make the Flanker a force to be feared in dogfights as well as longer-range engagements. Not unlike the Eagle, the Su-27 is classified as an air superiority fighter but is versatile enough to perform strike missions. To this end, it carries FAB and RBK bombs, as well as rockets from the S-8/13/25 series.

The Flanker’s versatility and raw performance prowess led to it becoming an export hit, despite not being initially intended for that role. The Su-27 was procured by Vietnam, Indonesia, Ethiopia, Angola, Kazakhstan, and Mongolia, and continues to be used by almost all of these states in varying numbers. Partly as a result of its unexpected export success, the Su-27 produced no shortage of Soviet-era as well as post-Soviet variants. These included carrier-based versions, two-seaters for training purposes, a longer-range strike variant, and several country-specific export versions. Most notably, the Su-35S—arguably Russia’s best non-stealth fighter—has its roots in a late Su-27 modernization project.

China was the first and is by far the largest Su-27 customer, ordering as many seventy-six units over the span of three contracts. China’s twin-engine Shenyang J-11 air superiority fighter is a license-built Su-27 variant that continues to comprise a large swathe of the People’s Liberation Army Air Force’s (PLAAF) inventory, with 235 models currently in service.

A vast, inherited fleet of around four hundred Flankers continues to fly for Russia’s Air Force and Navy. Russian Su-27s regularly conduct interception missions against NATO assets in the Baltic and Black Sea regions, and reportedly flew sorties at least on several occasions during Russia’s intervention into the Syrian Civil War. Moscow intends to eventually replace its aging Su-27 and MiG-29 models with the new Su-57 fifth-generation fighter, but it could take many more decades for the Su-57 to be serially produced in significant quantities. In the meantime, the Su-27 and its upgraded variants will continue serving as one of Russia’s most numerous and flexible fourth-generation workhorse fighters.