Russia's Su-34 Combat Aircraft Will Soon Get a New Missile 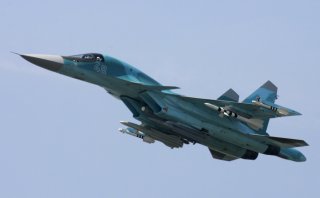 The Russian Air Force’s Sukhoi Su-34 has been seen as one of Russia’s most capable strike fighters; it blends a time-proven airframe design with numerous modern performance features. The combat aircraft also proved it was more than capable when it was deployed to Syria, where it was employed in attacks against rebel and ISIS forces.

The fighter-bomber is able to acquire targets using the GLNASS satellite system for bombing—and now its crews could soon further hone their air-to-air combat skills.

Earlier this week, the Russian Federation’s Ministry of Defense announced that crews of the Sukhoi Su-34 (NATO reporting name “Fullback”) multifunctional fighter-bombers of the Mixed Aviation Division of the Central Military District will perform combat launches of air-to-air missiles for the first time as part of a tactical flight exercise in the Astrakhan Region. During the combat training flights, the Su-34 crews will make more than twenty sorties and practice the detection and destruction of high-speed, super-maneuverable target missiles, as well as single and group air targets of the fighter type with short-range missiles used in conditions of high-maneuverable close air combat.

The flight-tactical exercises, which will be held in mid-June, will reportedly involve twelve aircraft including the Su-34 combat aircraft, along with An-12 transport aircraft and more than fifty units of ground equipment as well as about five hundred troops from the flying, technical staff, group management and security of operations.

The Sukhoi Su-34 was originally designed as an all-weather, supersonic medium-range fighter-bomber/strike aircraft. Based on the Su-27 air superiority fighter, the Su-34 features an armored cockpit for the side-by-side seating of its two-person crew.

The aircraft was actually developed at the tail-end of the Cold War for the Soviet Air Forces, but the Soviet aircraft industry was able to produce only a handful of Su-27 variants over the following years. The relation of those Su-27 variants to the later Su-34 production aircraft remains disputed.

However, it is known that the Su-34 program was revived in earnest in the early 2000s; yet by that time, many of its internal components were outdated. As a result, the program went through a refit and modernization effort, whereby the Su-34 received significant upgrades including digital onboard controls, a more streamlined navigation system, and improved electronic countermeasure (ECM) capabilities. This newly designed Su-34 only formally entered service in 2014 as an all-weather, two-seat, supersonic Generation 4+ strike fighter.

Its twelve hardpoints are compatible with a slew of air-to-air, anti-ship, and air-to-ground, and cruise missiles, as well as numerous entries from Russia’s vast catalog of TV, laser, satellite-guided bombs.

There have been conflicting reports that early Su-34 models may have conducted ECM warfare against Georgian air defenses during the Russo-Georgian War of 2008. The Su-34 has been widely regarded as the most technologically advanced aircraft that Moscow deployed during the Syria Civil War, where it was used to strike rebel and ISIS positions with guided bombs in multiple sorties from 2015 to 2016.