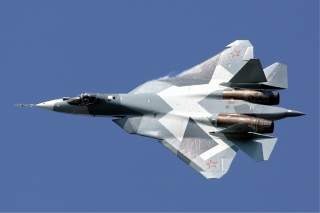 Russia’s victory day parade, an annual celebration of the Soviet victory in the Second World War, has grown over the past decades to become one of the country’s major holidays. The parade also serves as a showcase for the latest Russian military hardware, forecasting military trends and export ambitions alike.

What can this year’s parade tell us about Russian defense priorities?

First, we must address the missing elephant in the room: the total absence of an air flypast column, typically the highlight of military parades. This year’s performance was to be among Russia’s most ambitious, with 74 aircraft flying over Moscow in commemoration of the 74th Victory Day parade since 1945. The omission is especially jarring in the case of the Su-57, revealed with great pomp at last year’s victory day.  The fifth-generation fighter was widely expected to return for a follow-up performance, amid Moscow’s ongoing effort to pitch the jet to major importers including China and Turkey.

Adverse weather is to blame, according to the Russian Defense Ministry:  “In relation to difficult weather conditions along the Moscow region flight path, the airborne component of the parade has been cancelled.”  Russian President Vladimir further explained the decision in an brief interview from the event: “it’s a shame that the weather would not allow a flypast column… they need 400 meters of visibility, but had only 150, so it wasn’t to be. But there is no need to take unnecessary risks with the safety of the pilots as well the [parade] attendees.”

As expected, several T-14 Armata tank were the centerpiece of the armored column procession. Arguably the most advanced tank in the world by its features and raw specifications, it is also Russia’s most expensive. As the Armata tank enters serial production over the coming decade, it remains to be seen if enough can be made to meet Russia’s bold target of filling 70 percent of its main battle tank (MBT) roster with T-14’s.

The S-400, Russia’s current flagship air defense system, was displayed during the parade. The S-400 became famous after the political fallout from Turkey’s decision to purchase the S-400 over its US Patriot counterpart, prompting Washington to suspend all F-35 deliveries to Turkey.

What’s rather more interesting is the exclusion of the S-500, the much-anticipated next generation of Russian air and missile defense technology. Given the newfound zeal with which Rosoboronexport-- Russia’s state arms export agency-- is now pursuing S-500 contracts, a victory parade outing would have gone far in generating publicity and potentially even market interest.

The S-400 was joined by the Yars RS-24 ICBM, an iterative upgrade over the already highly capable Topol-M ICBM. Yars not only expands the raw destructive power of its predecessor, but packs it into a more sophisticated package consisting of four MIRV’s, each with a yield of 500 kilotons.

The infantry columns have remained largely unchanged over the past several years, though one special unit of the Russian National Guard was seen carrying the new AK-200 rifle. With their blend of reliability and cost-effective performance, the 200-series rifles have allowed Russia to finally establish a foothold in the lucrative Indian small arms market after decades of false starts and failed initiatives.

A final, curious omission is the large coterie of new Russian artillery units, from the “Penicillin” artillery reconnaissance system 2S42 “Lotos” self-propelled artillery gun. Given the Russian military's considerable investment into the modernization of its artillery roster over the past several decades, the parade appears to be a wasted opportunity to display the fruits of their labor.