Russia's Su-57 Stealth Fighter Could Fly for India. Here's Why. 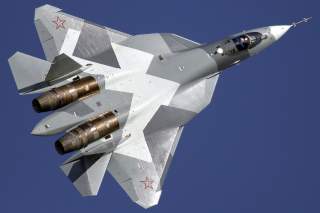 As Moscow moves to mass-produce the Su-57 in much larger quantities than previously expected, the Indian Air Force (IAF) is cautiously signaling its interest in Russia’s fifth-generation fighter.

IAF Chief of Staff Birender Singh Dhanoa gave the following appraisal in a recent interview with Russian media: “if you mean the [Su-57] fifth-generation fighter, we have not yet reviewed this issue. When it enters service in your armed forces-- only then will we be able to make a decision. We will consider it for procurement after we see it in action and it is delivered to us for review.”

Russia’s arms export industry has re-pitched the Su-57 to India several times since New Delhi’s 2018 withdrawal from a joint Russian-Indian program to manufacture a Su-57 export variant known as the FGFA (Fifth Generation Fighter Aircraft). As tepid and carefully-worded as it is, Dhanoa’s statement is arguably the clearest public acknowledgment to date that India has not taken the Su-57 off the table as a prospective import option.

Defense coverage tends to focus on two primary technical reasons behind India’s withdrawal from the FGFA program: the IAF’s dissatisfaction with the Su-57’s stealth capabilities, and their concern over the production-readiness of its Izdeliye 30 engine. Neither have been resolved; the IAF’s insistence on stringent low-observability requirements speaks to a fundamental difference in design philosophy with the Su-57, which balances stealth features against best-in-class air superiority performance. Meanwhile, a concrete production timeline for the Izdeliye-30 engine remains as elusive as ever; the last update comes from Russian Deputy Prime Minister Yuri Borisov, who confirmed to Russian media outlet Interfaks that the first batch of 12 Su-57’s to be delivered later this year will ship with the older and weaker AL-41F1 stopgap engine. Borisov added that the Izdeliye-30 is still in the development stage, and has yet to begin state trials.

Nonetheless, the underlying cause of the FGFA’s demise was political in nature. New Delhi approached the FGFA program in the spirit of their Make In India initiative, pushing for full technology transfer in blueprints and manufacturing expertise, as well as extensive licensing rights; the arrangement collapsed in large part because the Kremlin was uncomfortable in granting India that role.

A revival of the FGFA program is likely no longer in the cards, but that may work to Russia’s advantage. If the Su-57 is offered to India as nothing more or less than an import product, rather than a joint-production project, then it no longer has to abide by the strict specifications requirements that led the IAF to abandon the FGFA in the first place.

This development is by no means a guarantee that the IAF will opt to purchase the Su-57 after verifying its final specifications and performance over the coming years, but it does suggest that New Delhi has begun to see the Su-57 in a different import light. Aiding this perception is a mutual sense of goodwill between New Delhi and Moscow, generated on the heels of a 2018 $5.43 billion arms deal for the delivery of five Russian S-400 surface-to-air-weapons systems and four Russian Admiral Grigorovich-class frigates, as well as an ambitious 2019 joint venture to produce Kalashnikov’s new AK-203 rifle.