Russia's Su-57 Stealth Fighter Has One Target In Its Sights: The U.S. Navy 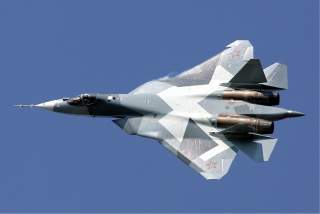 The Su-57 is Russia’s equivalent of the U.S. F-22 and F-35 stealth fighters. A Mach 2 aircraft capable of air superiority and ground-strike missions, it is Russia’s first stealth plane, and probably the most sophisticated aircraft in the Russian arsenal.​