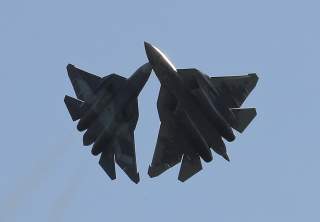 All the cards are stacked against the Su-57 — the price of oil is low, it’s engines are no better than its predecessors, and the current airframes it would replace are doing just fine.

Russia depends on oil and gas for revenue. If these energy exports would slow to a trickle — or when the price for these exports is low, less money flows into Russian state coffers.

The disagreement between Saudi Arabia and Russian to put a price floor under crude prices by cutting oil production has caused the price of oil to fall dramatically. Increased Saudi production has flooded the market with a glut of cheap Saudi Arabian crude, which is designed to undercut Russian exports of the black gold.

Saudi Arabia’s consolidation of its global market share is bad news for the Su-57, and really all Russian military acquisitions, which will likely be hit hard in the future. There will almost certainly be less money for ambitions and expensive projects.

There is another fundamental problem with the Su-57 — its engines are essentially the same as those of the aircraft it is designed to replace, the Su-35S.

Additionally, both the Al-41 and the Izdeliye 30 are essentially higher performance variations of the Al-31 engines. What the Su-57 program need are completely new engines designs — no easy feat.

Thus while the Kremlin’s Su-57 does have a better (more reduced) radar cross-section than the Su-35S, the latter airframe is fairly advanced for a fourth-generation fighter, and has proved itself more than capable where it has been deployed, particularly in Syria.

In 2018, India withdrew from the planned joint Russian-Indian Su-57 development. The Indians were evidently not convinced that the stealth and flight characteristics could provide exactly what they were looking for — another financial blow to the program.

Quite frankly, there just isn’t a pressing need for the Su-57 in the conflicts in which Russia is currently involved in. The Su-35S and other aircraft are proven platforms that can do the job, without an expensive and perhaps ineffectual stealth aircraft.

It doesn’t make a lot of sense to begin mass production of the Su-57. The unresolved oil price war with Saudi Arabia, and potential economic cooling due to the Coronavirus pandemic means there will be less money in the future for the airframe. It’s also just not terribly needed yet — The Su-35S is cheaper, and effective.

Perhaps when it becomes more obvious that the Su-35S and other aircraft are unable to fulfill their missions, we’ll see more Su-57s in the air. Until then, don’t expect much from Russia’s first stealth fighter.