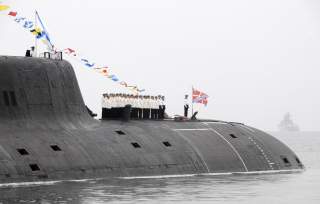 The Russian navy’s submarine force, arguably the fleet’s most important component, is about to shrink. Potentially a lot.

Most of the front-line submarines date from the 1980s and ‘90s. “There are still quite a few old, Soviet-era vessels carrying a major part of the burden, both attack submarines and ballistic-missile boats,” Iain Ballantyne, editor of Warships International Fleet Review, told The National Interest. “For how much longer such elderly vessels can be sent to sea while waiting for more new ones to enter service is debatable.”

“There are surely already question marks over a number of vessels,” Ballantyne added, especially the seven Delta-class ballistic-missile boats, or boomers. Just three of Russia’s boomers -- the first three of 10 planned Borei-class vessels -- are younger than 30 years old.

Just one of the nuclear cruise-missile boats -- the first of 10 planned Yasen-class vessels -- is younger than 24 years old.

It’s rare for a submarine to be safe and economical to operate -- to say nothing of militarily effective -- after 35 years of service.

In other words, by the late 2020s or early 2030s, the Russian navy could lose all but 12 of its existing subs. If Moscow succeeds in producing all the Boreis and Yasens it plans to acquire, the total submarine fleet could top out at just 28 boats. Half its current strength.

“There will come a time when a whole swathe of the Russian submarine force both in the Northern Fleet and the Pacific Fleet – the most important naval formations -- will no longer be operational, leaving huge gaps,” Ballantyne said.

The problem of vanishing submarines is a common one for the world’s leading navies. The U.S. Navy’s sub force also is set dramatically to shrink.

Submarines, after all, are expensive -- and they don’t last forever. Nuclear reactors wear out. Rust takes a toll. Navies that bought many submarines late in the Cold War face a bow wave of submarine retirements that they cannot hope to make up with new construction.

Dozens of three-decade-old Los Angeles-class attack subs are likely to decommission in the next few years while many fewer new Virginia-class boats commission, shrinking the overall U.S. undersea fleet to just 42 attack boats and a dozen or so boomers around 2028. "Where we sit today is, we can’t build ships and deliver them in time to fill in that dip," said Vice Adm. Bill Merz, a deputy chief of naval operations.

The Royal Navy in recent years already underwent its own great undersea contraction, shrinking by half to just six attack boats and four boomers.

“The submarine forces remain the pride of Russia and have received major investment in new vessels and weaponry, both at the high end and low end – in new nuclear-powered and also conventional submarines,” Ballantyne explained. “It has been carefully targeted to try and give Russia maximum power-projection capability and influence while also bolstering strategic missile defense and intelligence-gathering.”

But the aging-out of older vessels still dramatically will change Russia’s undersea force structure. “Eventually a much smaller number of modern, more capable boats will carry the burden of fulfilling [Russian president Vladimir] Putin’s grand plans of Russia remaining a maritime superpower capable of aspiring to a global presence under the sea,” Ballantyne said.