Russia's Submarine Force Is Getting Stronger. How Worried Should We Be? 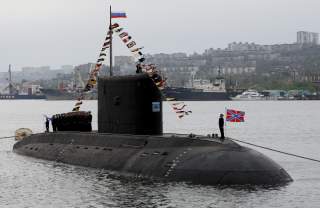 Since the 2011, Russia has been pursuing an ambitious plan of modernization for its armed forces on land, sea and air. After a period of neglect during the 1990s, Russia is preparing to challenge its competitors beneath the waves once again by including its submarine fleet in this renaissance.

Depending on the author, however, these efforts have been characterized by Western observers as either deeply alarming or of little concern at all. However, an analysis of these capabilities in the context of Russian priorities makes clear this investment is meant to secure Russia’s ability to carry out traditional roles which would have been familiar to the Soviet Navy, and while obstacles have prevented Russia from realizing the entirety of their ambitions an increasingly well-trained and well-equipped fleet will add significantly to the concerns of NATO and partner navies who had largely abandoned antisubmarine warfare as a discipline following the end of the Cold War.

Following the breakup of the USSR and the creation of the Russian Federation production of new submarines, completion of ongoing projects, and regular fleet training all stagnated. Deterrent sorties by ballistic missile submarines became increasingly rare; in 2002 no such sortie was conducted at all. These issues came to a head when the submarine Kursk was lost in the Pacific with all hands in 2000, and a board of inquiry blamed faulty equipment and lax training for creating an environment ripe for disaster.

Such a public example of the poor state of the navy, NATO expansion, and U.S. interventions in the Middle East and Africa provided the impetus for a general military modernization plan with the submarine fleet being a key focus of the effort. Work on partially finished hulls resumed, and development of cutting-edge designs which had been stalled after the Cold War was restarted with the equivalent of $78 billion USD in funding for new naval ships, many of them new submarines. This program would serve the dual purpose of restoring the Russian Navy as a force at sea and address the risks posed by aging ballistic missile and attack submarines being retired and scrapped without replacements.

Several current Russian submarine types are expected to undergo upgrades to extend their service lives. The Nuclear Threat Initiative (NTI) points out that navy’s period of decline has been helpful, as resources need not be spent maintaining an entire fleet of aging designs and can be instead spent only on the best retrofit candidates. Several Oscar- and Akula-class submarines are slated for modernization, with some of the Akula’s being retrofitted to fire the Kalibr cruise missile and thereby increase the fleet’s land-attack capability. The venerable Kilo-class diesel submarines are also being retrofitted to continue serving until new nuclear-attack submarines and next generation Air Independent Propulsion (AIP) submarines are available, with six advanced examples of the class being ordered for the delivery to the Pacific Fleet for 2020.

In terms of new shipbuilding Russia is again concentrating its efforts on building boats which are more technologically advanced and heavily armed, a move characterized by Magnus Nordenman as rejecting the Soviet Union’s focus on quantity in favor of a more Western-style focus on very high quality. The Lada-class diesel submarine is the successor to the highly regarded Kilo-class. Though smaller than its predecessor, it possesses a lower acoustic signature, more powerful propulsion system, and an automated combat control system which cuts down on crew demands. Naval Technology reports that the Russians currently plan to build eight of these submarines. Though the navy planned to equip this class of submarines with an AIP system which would have dramatically increased its underwater endurance and decreased its acoustic profile, the development of the system has yet to bear fruit and the first three boats in the class were launched without it. The Borei-class boats represent Russia’s new fourth-generation ballistic missile submarine, though early examples of this type were completed using portions of incomplete Akula III-class submarines. Although the Russian Navy had initially envisioned pursuing an advanced Borei-B class, these plans have been shelved in favor of purchasing six additional Borei-A class boats. This would bring the orders for the class to a total of fourteen boats. As with the Borei-class lead vessels, the early Yasen-class attack submarines were completed using portions of incomplete vessels from the 1990s. As a nuclear attack submarine, these boats will serve to disrupt enemy SLOC and defend the ballistic missile submarines when they are posted to their launch positions. Additionally, they will be outfitted with nuclear-capable Kalibr-missiles allowing them to fill a land-attack role. As many as five additional boats have been ordered for delivery by 2023.

Looking over the horizon, Russian planners are putting significant stock in the creation of their new Husky-class nuclear submarine. Still in its conceptual stages, NTI assesses Russia intends to have a more concrete design by the end of summer 2018 with a desire to complete construction of the first examples of the class sometime in the 2020s. Described by NTI as a “Joint Strike Submarine,” the boat is expected to be modular with plans for an attack submarine and guided-missile submarine variant, as well as a potential ballistic-missile submarine variant. Russia hopes this would provide a cheap alternative to their expensive, specialized modern classes and also prove a cost-efficient way to ensure a steady supply of boats as older classes reach the end of their service life. Kaufman argues the Russian experience in building the early Yasens and Boreis give them the capability to realize the majority of their goals for this class. Design work was also recently completed on the Project Kalin next-generation diesel submarine, which will build on the Lada-class advances and may field AIP technology.

More than simply new boats, reports indicate that the Russian Navy is engaging in a concerted effort to give crews the training and expertise necessary to use fleet assets to the greatest possible effect. Russian submarines increased their patrols by 50 percent in 2014 and then doubled that number in 2015. Russian navy chief Admiral Vladimir Korolyov reported that his submarines had spent more than three thousand days at sea in 2016, meeting the operational standard set by the Soviet Navy.  These operations have not been confined to mere exercises or training cruises. In a surprise move in 2017 a modified Kilo-class sub, the Krasnodar, executed a cruise missile strike on Syrian opposition forces even as it was track by a group of NATO vessels. Finally, British news sources recently reported that Russian submarines successfully chased a British Astute-class submarine away from its station, preventing it from participating in a strike against the Assad regime’s chemical weapons program.

Common narratives addressing Russian naval ascendancy either focus on the seemingly stunning capability of these new subs or the significant challenge posed to Russian ambitions by the aged state of their current fleet. Either carried to an extreme is a mistaken impression. Russia neither aspires to dominance of the global-world order nor can it afford to allow its fleet to once again fall into a state of neglect and inactivity. It is likely that Russia will remain committed to an aggressive shipbuilding program and training/exercise schedule for its submarine fleet, but it is also likely that Western powers can take appropriate steps to ensure the balance of undersea power remains in their favor through this period of modernization.

Analysts like Steve Micallef clearly believe that current Russian naval strategic priorities are to maintain and defend a nuclear deterrent as part of a full nuclear triad, protect the Russian coastline, project a Russian presence globally, and threaten NATO SLOC in the event of conflict. These priorities require a strong submarine force more than any mix of surface ships. An effective nuclear deterrent must simultaneously be capable of strategic surprise and be able to survive a first strike. Surface ships are easy to monitor and thus more vulnerable to a preemptive strike. Russian nuclear submarines, by contrast, can operate and fire from positions of stealth over extended periods of time. They have also traditionally patrolled areas difficult for NATO forces to access, with their passages guarded by combined air, surface, and undersea assets. Russian coastal defense doctrine has also prioritized undersea attacks from its earliest days, believing that these assets are less likely to be swept from the sea by a superior Western force than surface vessels. Finally, submarines provide a level of global-power projection appropriate to Russia’s means and goals. As described above, the submarine force has publicly demonstrated Russian capabilities on several occasions, though in ways which also would have allowed them to mask any ongoing problems. If the Krasnodar’s missile attack had failed, the submarine could have simply sailed away while accomplishing the goal of alarming NATO policymakers who would have been mystified by the operation. By contrast, when surface ships fail it is difficult to disguise their shortcomings, as when Russia’s only operational carrier had to be towed by a tug during a recent cruise. A failure to field an effective submarine force would leave all these strategic objectives critically underserved and is unacceptable to Russian policymakers after high profile failures in the 1990s and 2000s.