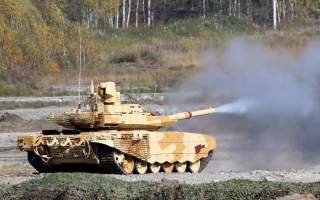 One of the U.S. military’s biggest advantages is the navigation system used by its mechanized forces. Generically, this capability is known as “blue force tracking.” It is characterized by the ability for vehicles to know the position of all friendly vehicles around them via a battlefield network.

The advantages of this capability are numerous: Commanders can quickly react to changing battlefield situations because they will know where their troops are, the speed of maneuvers can be increased as it takes less time for units to orient themselves relative to each other, and probable enemy locations can be shared across the entire net.

Given the advantages of such systems, one would think that Russia has a similar capability in their latest tanks. However, the truth is more complicated. Each vehicle is theoretically able to field similar capability, but budgeting limitations have restricted the deployment of a force wide blue force tracking capability. But what is “standard” for Russian tanks? Is it close to what the U.S. military fields?

The heart of any battlefield network is the radio. Without radios, an individual vehicle has no way to receive or transmit commands or any kind of data. The standard radio on most frontline Russian tanks is the R-168 radio complex. The R-168 provides a voice as well as data link between all tanks in a formation at distances of up to thirty kilometers on the move. For data, it can transmit at up to sixteen kilobits per second.

Another key component that’s somewhat widely issued is the Azimuth navigation system. The system consists of a GLONASS receiver, an electronic compass, and some other sensors. The system interfaces with the R-168 to broadcast a vehicle’s location, heading, and some other parameters on the battlefield network.

It’s possible to make the Azimuth give a navigational readout to a vehicle’s crew, but this is not commonly done. A vehicle’s position is more likely tracked and watched at a command post: possibly a T-90AK or other command tank variant.

The combination of Azimuth and the R-168’s data transmission capability gives Russia a limited blue force tracking capability, assuming both are installed. The positional updates provided by Azimuth over the radio net allow for a command post or command tank to track the locations of said vehicles on a moving map.

This suits Russia’s “top-down” command philosophy well, though it lacks the flexibility the US military has with blue force tracking being installed in almost every vehicle. Most vehicles with Azimuth installed won’t have the equipment to receive locations from other Azimuth equipped tanks, as the screen used for blue force tracking is not installed on line tanks.

In contrast, practically every Abrams in the U.S. military has BFT with the ability to see the position of other friendly vehicles on a moving map installed. This allows for easier platoon coordination exercises and navigation, in contrast with a Russian tank that must navigate via radio commands or by using a map. Independent navigation systems like the TNA-3 exist, but again these are typically only installed on command vehicles.

Attempts were made to change this in the 2010s with the T90A2, which featured a battle management system called Sozvezdiye-2M, but this did not enter service. Recent developments appear to be less ambitious. The T-90M is said to have a moving map screen, so it’s possible that T-90Ms will be able to track each other and the position of other Azimuth equipped vehicles around them.

Even then, the network will still be only able to work in a relatively limited area compared to BFT, which uses satellite uplink, due to its reliance on digital radios. The Armata is also said to field similar systems to the T-90M, presumably with the multitude of screens in the crew compartment there should be no problem integrating this capability. It’s unlikely that the Armata will transition to using satcomms for BFT.

While much has been written about the armament, armor, and mobility of upcoming tanks, command and control can often be as important, if not more in winning battles. The United States appears to retain a significant advantage in this area; most Russian tanks are not even equipped with Azimuth, much less readouts and advanced satellite communications. However, since the Russian military retains a largely top-down command philosophy and also makes extensive use of electronic warfare, the reliance on older-school navigation and command networks might make more sense.