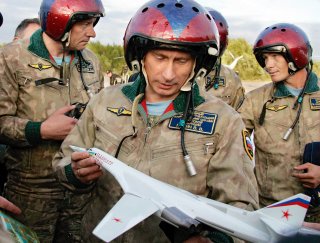 A second prototype of the Russian Air Force's Tu-22M3M supersonic bomber underwent trials at hypersonic speeds during a fourth test flight, Russian state media reported. This second prototype successfully performed its maiden flight in March of this year, and the aim of that flight was to assess the takeoff and landing characteristics, as well as to test the information control system.

"Five flights have already been performed," a defense industry source told TASS. "The hypersound speed was achieved during the fourth flight. The aircraft demonstrated good stability and controllability. Modified systems and equipment are performing normally during the trials."

The first upgraded prototype performed its debut flight in late December 2018. That aircraft carried no armament and in a flight lasting thirty-seven minutes it proceeded at an altitude of fifteen hundred meters. As of October of last year, the first prototype had completed eighteen successful test flights.

Preliminary trials are now scheduled for completion in 2020. The Russian Air Force is scheduled to start taking deliveries of the upgraded bombers in 2021, while dozens of the older Tu-22M3 airframes will be retrofitted with the M3M upgrade package in the coming years.

During the upgrades, the bombers will get not only the new avionics but also the capability to employ new missiles including the X-32 (Kh-32), a supersonic air-launched cruise missile that has a range of 600 to 1,000km. While officially classified as anti-ship missiles, these were developed to be effective against critical infrastructure targets including bridges and power plants. The X-32, which allows a bomber to occupy a unique position between strategic and operational-tactical roles, has been the primary missile on the Tu-22M3 bombers since 2016.

The Tu-22M3M will also reportedly be able to carry Russia's new hypersonic missile, which is not part of the line of X-32 missiles.

The Tu-22M3M, along with its M3 predecessor and MiG-31k, is among just a handful of currently operational Russian aircraft that is confirmed to be compatible with the nuclear-capable, Mach 10 speed Kh-47 "Kinzhal" missile that Russian President Vladmir Putin unveiled during his 2018 address to the federal assembly.

The National Interest has previously reported that the Tu-22M3M is not only a valuable addition to the air component of Russia's nuclear tried but could be seen as the spearhead of a new power projection strategy to counter American carrier strike groups (CSG) that operate near Russia's sphere of influence.