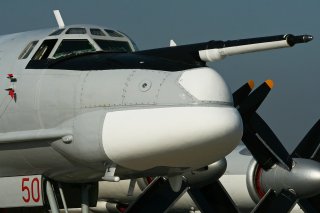 The Cold War-era Tupolev Tu-95 “Bear” is one of the oldest aircraft designs in active service with the Russian Air and Space Force (RuASF), and it remains the only propeller-driven in operation today. Despite its age, however, this Bear has some serious fight yet and shows no signs of being retired. In fact, the RuASF has continued to roll out modernizations that will keep the aircraft flying with added capability beyond its original role to drop unguided bombs.

This week, the United Aircraft Corporation (UAC) announced that the modernized Tu-95MSM strategic missile-carrying bomber will now be capable of carrying eight missiles instead of four, while the aircraft has received new flight control, navigation and communication systems.

During its most recent upgrade, the Tu-95MSM, which has likely been flying longer than any of its crews have been alive, also received new weapon and aircraft control systems, an improved onboard communications suite and new radar and data recording equipment. These system upgrades will enable the strategic bomber to boost the efficiency of its combat employment.

“A possibility has appeared to carry eight instead of four missiles, i.e. to increase its weapon payload two-fold and extend the aircraft’s service life considerably,” Yuri Slyusar, CEO of UAC, said during an interview with the Zvezda TV Channel on Monday Tass reported.

During this week’s Army-2020 International Military and Technical Forum, which kicked off on Sunday, Slyusar reportedly met with Russian Defense Minister Sergei Shoigu and the UAC chief said that the flight tests of the first prototype of the heavily upgraded bomber had already begun.

The Tu-95MSM performed its debut flight at the aerodrome of the Beriev Aircraft Plant in Taganrog, and the improved Bear was piloted by the crew under the command of a test pilot Andrei Voropayev from the Zhukovskaya flight testing base, which is a subsidiary of the Tupolev Aircraft Company. According to state media, the flight proceeded in the normal mode at an altitude of nine thousand meters and lasted two hours and thirty-three minutes. The systems and equipment performed as expected and the entire test flight was conducted without a hitch.

The Tu-95 first entered service with the Soviet Air Forces in 1956 and is expected to remain in service with the Russian Air and Space Force until at least 2040. Despite the age of the aircraft, it remains in service because few Russian aircraft can cover such great distances for such long periods of time while carrying the large payload.

Earlier this year and upgraded Tu-95MSM reportedly took part in the aircraft platform’s first combat sortie in Syria, where it was used in a bombing mission against a terrorist groups’ stronghold. That particular aircraft used in the mission may have been of the first upgraded models that the RuASF had received, and it was escorted by a “legacy” Tu-95MS bomber as well as by Sukhoi Su-35 Flanker fighter jets.

It will be worth watching to see when this newest improved version makes its combat debut—as it can pack double the punch of its predecessor models.