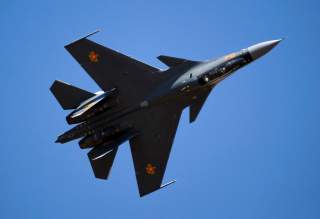 Chinese and Russian fighter pilots have been testing their skills in an unprecedented series of maneuvers in southeast Russia. Some observers have billed the Aviadarts exercise as a Russian Top Gun—a reference to the U.S. Navy’s fighter tactics schoolhouse, which the sailing branch established after losing a shocking number of pilots during the Vietnam War.

(This article by Thomas Newdick originally appeared at War is Boring in 2014.)

The reality is not as straightforward, but it’s significant that Moscow is inviting foreign fighter jocks—the Chinese, namely—to test their mettle against the best Russia has to offer.

Aviadarts is different, however, since it has been conducted in the full glare of publicity. Indeed, the Russian media has made much of this fighter pilot competition, in a bid to show off an air force that is now, finally, dragging itself out of the doldrums after years of under-funding and piecemeal re-equipment.

While it may serve to identify the most proficient combat pilots, unlike similar Western gunnery competitions, all branches of the air force have the chance to take part, including bombers, helicopters and even transports. Crews of the latter display their accuracy by dropping simulated payloads onto landing zones.

Should a competing pilot win in their category at the competition, they get an automatic place at the air academy at Voronezh, Andrey Zinchuk and Alexander Mladenov explain in their report in the current issue of Combat Aircraft. Entry to the air academy, equivalent to a Western air command and staff college, otherwise would require passing various exams.

Aviadarts first took place in 2013, when around 50 pilots participated. This year has already seen two rounds of the competition. The first, which concluded in May, was an all-Russian affair, and involved around 50 aircrew flying from three different air bases.

In order to get a place competing at Aviadarts, Russian pilots first must prove themselves the best within their own units, and then within their military district—one of the four operational commands of the Russian armed forces. Physical fitness, tactical acumen and gunnery all count.

For the fighter pilots, a place at Aviadarts means heading to Lipetsk, the Russian air force’s center for combat and conversion training. If there is an elite unit within today’s Russian air force, then Lipetsk holds that mantle. Once at Lipetsk, competing fighter pilots have to demonstrate their skills in aerobatics, navigation, reconnaissance and evasion of ground-based air defense systems—including the feared S-300 surface-to-air missile.

Certainly, some of the aspects of Aviadarts would come as a surprise to a NATO or other Western flier. In the weapon-employment phase, the tactical jets only employ unguided ordnance. That is to say, on-board cannon, free-fall dumb bombs and unguided rockets and no precision-guided munitions or guided missiles.

This might seem positively antiquated, but Russian staff consider it the best way of assessing individual aircrew skill. For the air-to-air phase, fighter pilots utilize captive air-to-air missile rounds, equipped with working seeker heads but no motor or warhead, familiar their Western counterparts.

More surprising is the element of the competition in which aircrew swap seats with their comrades. After drawing lots, pilots get assigned to an aircraft they haven’t flown before. After a handful of familiarization flights, they head over the gunnery range in their new mount, to dispense live ammunition.

By opening up Aviadarts to international participants, the Russian military is not only exhibiting the prowess of its aviators, but making efforts to build foreign relations at a time when Russia’s foreign policy is facing harsh criticism.

Moscow had hoped that France, Belarus and Kazakhstan would join China in attending. While authorities never explained Kazakhstan’s no-show, the French air force’s failure to appear at Lipetsk was hardly surprising. With France among the nations helping to demonstrate NATO’s readiness in the face of increasing Russian aggression in the Baltic and Black Sea, it would have delivered a very mixed message.

On the other hand, France has more experience than most of joint air exercises alongside Russia. Back in August 2013, a French air force Mirage F1 unit swapped Baltic air policing duties in order to go and train with the foe—taking part in a Russian air force live-fire exercise at Savasleyka. French and Russian pilots even took turns to test-fly each other’s fighters.

The presence of Belarusian Su-25 attack aircraft was less noteworthy. Belarus and Russia already maintain cordial relations, enjoy a mutual defense treaty, and have previously undertaken joint exercises. A Russian air force deployment of fighters and early warning aircraft meanwhile is present in Belarus, with plans for the fighters at least to remain there for the long term.

The latest Aviadarts was conducted in late July and the Chinese presence comprised three People’s Liberation Army Air Force Su-30MKK Flankers. The aircraft deployed to Lipetsk from their base at Cangzhou-Cangxian. Interestingly, this airfield is home to the PLAAF’s Flight Test and Training Center, the equivalent unit to that based at Lipetsk.

While Russia operates similar derivatives of the two-seat multi-role strike fighter, China has considerably more experience with front-line operations with the advanced Flanker. Alongside the various different Flanker derivatives flown by the elite Lipetsk unit, also on hand were three single-seat Su-27SMs from their base at Dzemgi in the Russian Far East.

Above all, perhaps, the high level of local media attention afforded to Aviadarts should be seen in light of Russian president Vladimir Putin’s efforts to flex Russian military muscle to the watching world. It was not too long ago that Russian air force units were struggling to find the fuel and spares to maintain even the minimum level of daily operations.

In the last decade or so, Moscow has made significant efforts to address deficiencies, including delivering new and upgraded warplanes and making various attempts at reorganization. Above all, however, the high-profile aspects of the air force have received the most support—long-range bomber patrol missions, for instance, and now large-scale exercises.

The fact that Russia’s next-generation fighter prototype, the Sukhoi T-50, made a cameo appearance at Aviadarts in May had little to do with the need to test it under realistic conditions and everything to do with the presence of the press corps and high-ranking officers on the firing range.

That’s not to say that competitive exercises like Aviadarts don’t also have a vital role to play in maintaining the readiness of the front-line forces. Unlike a large-scale Western exercise—Red Flag, for example—Aviadarts saw individual aircraft types active over the range in allocated slots, with no mixed or large-force employments.

That meant in the days before the fighters took to the air from Lipetsk, Long-Range Aviation assets were also up range. The Tu-22M3 bombers involved included examples armed with what were apparently live versions of the Kh-22 cruise missile, their primary weapon.

In the long term, we can expect to see more visits by the Chinese to Aviadarts, and other such exercises. On the one hand, China’s military is emerging from a long period of isolation, and the People’s Liberation Army Air Force is eager to learn lessons from other air arms. Previous joint exercises have seen PLAAF fighters visit both Turkey and Pakistan.

For Russia, this kind of alliance-building is useful at a time when its leaders increasingly are ostracized in the West.