A Sad History: All of the Times the West Abandon the Kurds 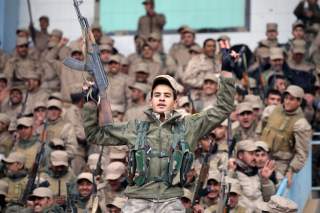 On October 6, 2019 President Trump announced with little forewarning that he was withdrawing a handful of U.S. special forces operators assisting Kurdish militias in northeastern Syria.

The presence of the special forces amongst Kurdish YPG fighters had formerly served as an effective barrier against Turkish attack. Their abrupt withdrawal, following a phone conversation between Trump and Turkish President Erdogan, gave Ankara an unambiguous green light to initiate military operations against the Kurdish forces which could not be walked back by subsequent conflicting statements from the White House.

Less than 24 hours later, Turkish jets began pounding Kurdish positions, followed by a Turkish artillery and ground attacks which have killed as many as one hundred.

Later, the United States joined Russia in vetoing a statement supported by the rest of the Security Council condemning Turkish operations against the Syrian Kurds.

The thirty to forty million Kurds are the fourth-largest ethnic group in the Middle East. Their century of political misfortunes arise from a cruelly simple reality: their people are dispersed across Iran, Iraq, Syria and Turkey, without a state to call their own.

As America has periodically warred openly or covertly with Iraq, Iran and Syria, it has supported Kurdish revolts in their territory.

But while the Kurd’s nation-building zeal and relatively progressive attitudes of certain Kurdish factions has attracted supporters amongst Western journalists and activists, Washington has never truly supported an independent Kurdish state.

Thus, despite a wellspring of mutual respect between Kurds and the West, the one constant has been disappointment and betrayal of the former by the latter.

During World War I, the United Kingdom engaged in struggle with the Turkish Ottoman Empire over the future of its troubled Middle Eastern territories. The stakes in this imperial throwdown were high: nothing less than the lucrative oil fields of the Middle East.

As British military fortunes waxed and waned, it recruited nationalist fighters amongst the Arabs, Jews and other minorities, promising independence from Ottoman rule. The most famous manifestation of this policy was Col. T.E. Lawrence’s, aka “Lawrence of Arabia,” who led Arab riders on wildly successful raids behind Ottoman lines, inspiring them with promises of self-rule that Lawrence’s masters were not inclined to keep.

Afterall, British support for indigenous nationalism raised awkward questions in London and Paris, who after all still wanted colonial mastery of the Middle East. In 1916, the British and French reached the Sykes-Picot agreement in which they carved up the Middle East into a French sector including Lebanon, northern Iraq and Syria and a British sector incorporating Israel, Palestine, southern Iraq and Transjordan.

Though the Franco-British colonial presence lasted only a few more decades, many of its fundamental political divisions endured.

The carving up of the multicultural Ottoman Empire could never “cleanly” separate its dispersed and intermingled ethnic groups. And like the odd-man out in a game of musical chairs, the Kurds simply didn’t make the cut.

For instance, the Paris peace conference, the Kurds’ calls to create to create a Kurdish homeland went unheeded. But the newborn state of Turkey under the leadership of secular nationalist Kemal Ataturk was not yet out of the fight.

Following years of additional fighting Ataturk managed to defeat Greek and British forces and negotiated the 1923 Treaty of Lausanne on more favorable terms—while eliminating any prospects of a Kurdish homeland such as the short-lived Republic of Ararat.

The script flipped again by the early 1980s. Revolution in Iran turned Tehran from a close friend to an enemy of Washington. When Saddam Hussein subsequently invaded Iran, the Reagan administration spent the next eight years supporting the Iraqi war effort.

While Iran again mobilized Kurdish independence fighters to effectively create a second front, this was a game two could play. Iraq later armed Kurds in Iran to fight against Tehran.

In the 1980s, Saddam made increasing use of chemical weapons in genocidal attacks on Iraqi Kurd communities, killing as many as 100,000. On March 16, 1988, Iraqi Su-22 attack jets and helicopters bombed the Kurdish town of Halabja with a combination of highly lethal nerve agents (including sarin) and skin-blistering mustard gas, killing over 3,200 mostly civilian Kurds.

Despite this incident later being often cited to justify U.S. military operations against Iraq, Washington was then so firmly in Saddam’s camp it tried to cast blame on Iran.

Meanwhile, a Kurdish insurgency led by the communist PKK flared up in military-coup-prone Turkey. The Turkish counterinsurgency effort, which involved heavy use of artillery, armor and air strikes, saw tens of thousands killed but did not decisively prevail. As Turkey was then a NATO ally in good standing, Washington had few qualms about selling Turkey the weapons used in its war effort.

Revolution! You start one, and we’ll…watch.

Washington’s coziness with Hussein turned after his invasion of Kuwait, leading to the Gulf War in 1991. As part of the campaign, the Bush administration rhetorically supported Iraq’s disempowered Shia majority and Kurdish minority.

But when those groups heeded Bush’s words and revolted, Washington didn’t offer any help. Saddam Hussein, despite reeling from his defeat in Kuwait, handily crushed both revolts with attack helicopter gunships and tanks. Bush Sr. feared that the overthrow of Saddam could lead to chaos in Iraq, a proposition his son would put to the test twelve years later.

However, Saddam’s retaliation against the Kurds eventually compelled the Clinton administration to declare a “no fly zone” over northern Iraq, leading a de facto Kurdish state to forming there.

In post-Saddam government, Iraq’s new Shia dominated central government was weaker than ever, and the defacto Iraqi Kurdistan state-within-a-state consolidated itself further.

Though the Iraqi Kurds belonged to a very different faction than those active in Turkey, Ankara grew increasingly agitated about this development. When in 2008, Turkish warplanes bombed Kurdish forces in Iraq and Turkish ground troops launched a limited ground incursion, the U.S. government did nothing to stop them. But these incidents did not seriously undermine Iraqi Kurdistan’s continued growth as an independent polity, to Baghdad’s annoyance.

As the United States disengaged from Iraq in 2010, it arguably was leaving on relatively acceptable, if not warm, terms with the Iraqi Kurds, having facilitated conditions for effective self-rule, though without diplomatic recognition.

But civil war in Syria and the rise of ISIS meant that the long and tragic U.S.-Kurdish relationship had another chapter in store for it, as detailed in a companion article.