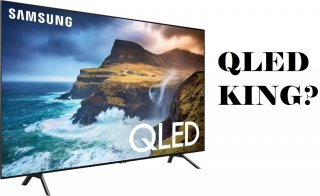 The great thing about Samsung is that you always know what you’re going to get. As for the 65-inch Q70 Series, you will be receiving pure quality at a reasonable price.

With a price tag of $1,200, the Q70 is much cheaper than its OLED TV rivals. Although most tests show that OLED panels probably boast better overall picture quality, Samsung’s QLED technology isn’t that far behind.

Even with the wide proliferation of OLED TVs currently on the market, Samsung is doubling down on its QLED technology and it has indeed gained a loyal following among consumers. Samsung is so confident in this venture that it has decided to halt the production of traditional LCD displays by the end of the year.

The Q70 provides excellent overall image quality with plenty-deep black levels. The high light output and full-array local dimming work wonderfully well with HDR and you’ll surely enjoy the accurate colors and solid video processing, which will be a boon for hardcore gamers and lovers of intense action films.

Wide-angle viewing, though, isn’t as good as the Q80, so if you have wider seating arrangements, take note of that. And if you watch TV often in a bright room, the Q70 does an honorable job in diffusing those annoying reflections.

For the Q70, Samsung employs its own built-in digital assistant Bixby, and many have shared their frustrations with this. Bixby, unfortunately, doesn’t come close to the skills of Google Assistant or Amazon Alexa, which can found on rivals from LG to Sony. The 2019 versions, though, will be able to respond to voice commands issued via Alexa and Google Assistant smart speakers.

The design of the Q70 is classic Samsung. The panel is as thin as you can get for a QLED TV right now and it does exude a slick and refined look. The legs, however, are set quite far apart, so if you’re using a TV stand or table, make sure that it is long enough. The Q70 also enables you to hide cables by running them through the legs.

One nice perk that often gets overlooked is the Ambient Mode, which is designed to show paintings or photographs on the screen when you're not watching it. You can even adjust the backgrounds to match your living room’s walls, and best of all, most of the content won’t cost you a penny.

All told, the Q70 TV strikes a wonderful balance between picture quality and price point, with plenty of side perks to boot. If you decide to purchase, you really can’t go wrong with this solid Samsung product.