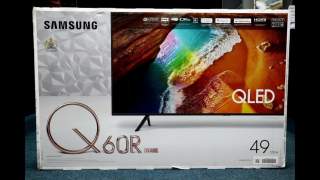 But there’s another side to this story. Since its introduction in 2017, Samsung has consistently worked to expand QLED’s market presence with yearly midrange models: first, the 2017 Q6F, and then the 2018 Q6FN. That torch has now been passed on to the 2019 Q60R, packed with Samsung's latest display technology and smart TV features at a sub $1000 price point. Here is all you need to know about Samsung’s latest entry-level QLED TV.

Perhaps the most striking fact about the Q60R is how shockingly affordable it is; the 43” option currently starts at $599, and the more standard size of 55” is available for $899.  So, what are you getting for that money? Quite a bit, actually.

The Q60R’s design is fairly distinct from its much more expensive flagship Q90 counterpart, with U-shaped legs that sit flush beneath the screen. The Q60 is also slightly thicker than the Q90, but still slim enough to look good while mounted. The only noticeable design sacrifice is the Q60’s unfortunate exclusion of Samsung’s excellent OneConnect box for seamless cable management, instead opting for the more traditional solution of routing cables straight from the back panel.

Then there’s the performance. Packing an onboard 4K Quantum Processor, the Q60R ably upscales 720p/1080p content to a crisp and remarkably color-accurate 4K picture, along with the rich blacks of more high-end QLED models. The Q60R is also an unexpectedly strong gaming contender, boasting extensive integration features for consoles, Freesync technology to eliminate any screen tear or stuttering, and some of the lowest input lag numbers for its class.

Samsung did have to cut a few performance corners to sell the Q60R at its remarkably competitive price point, and these compromises become more pronounced when displaying 4K HDR content. Gone is the Full Array Local Dimming (FALD) of Samsung’s flagship QLED line, replaced by an edge-lit panel that’s more susceptible to noticeably inconsistent lighting and glow spillover effects during dark scenes. The other downside of the Q60’s edge lighting solution is a middling maximum brightness-- still sufficient for regular content, but somewhat on the low end for those seeking an ideal HDR viewing experience.

There are, to be sure, a few other TV’s that will give you a similar picture at roughly the same price point-- so, why opt for the Q60R? This is where Samsung’s robust features ecosystem comes into play. As with all recent QLED panels, the Q60R boasts an ambient display mode to show art, your chosen photos, or useful information like the time and weather while on standby. Consider also that the aforementioned 4K Quantum Processor is proprietary Samsung technology, meaning that you sometimes won’t see the same upscaling quality from competing brands. Samsung’s Tizen TV OS offers additional functionality with other Samsung and Samsung-supported, from allowing you to use your Samsung phone as a remote to being able to control your SmartThings-enabled cameras or lights.

The Q60R jettisons some of the design and performance features of top-end QLED models to position itself as a strong midrange contender. The result is a compelling attempt to bring QLED to the masses, with something to offer everyone from regular movie watchers to avid gamers.