Samuel Colt Didn’t Invent the Revolver, He Perfected It 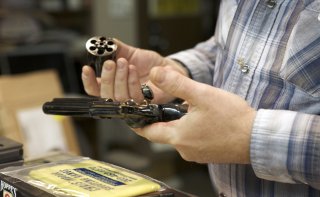 Long before U.S. Steel, General Motors or IBM were founded, there was another American company that opened its doors and is still in business today: Colt’s Manufacturing Company—even if it was purchased earlier this year by the Czech-based Česká zbrojovka Group. Founded in 1855, Colt Manufacturing was actually a successor corporation to Samuel Colt’s earlier firearms-making efforts that began in 1836.

However, the longevity of the company and the fact that even non-gun owners likely know the name “Colt” says a lot about the American weapons pioneer and titan of industry.

Samuel Colt remains largely associated with his revolvers, yet it is actually a misconception that he invented the firearm. The earliest revolving barrel firearms actually were produced by Venetian craftsmen in the sixteenth century, while in the seventeenth century German designers also created a variety of firearms that utilized revolving cylinders. Those weapons were complicated, difficult to use and most notably prohibitively expensive to make.

It wasn’t until 1836 that Colt was able to refine the design and more importantly mass produce it. Colt proved to be more of an innovator than a pioneering designer when it came to firearms, but his Colt Paterson popularized the revolver with Americans and in the process made him one of the nation’s wealthiest men.

If it were just the revolver design, Colt would still be among the most influential gun designers in the history of firearms, but his other contributions were even more notable. He was among the first to introduce interchangeable parts and an assembly line, which revolutionized firearms production. Unlike other designers, Samuel Colt also proved to be a shrewd businessman who was among the first to successfully use advertising, product placement and mass marketing to sell his products. He earned product endorsements from the likes of Italian nationalist Giuseppe Garibaldi and American religious leader Brigham Young, and hired Western artist George Catlin to help produce his ads.

He could even be described as an early “arms dealer” in that he was known to sell weapons to warring parts on both sides in conflicts in Europe—and this included gifting a custom-engraved and gold inlaid revolver to the Sultan of the Ottoman Empire Abdülmecid I, informing him that the Russians were buying his pistols. He employed a similar tactic with the Russians also to close a deal.

When he saw the United States headed for war, he supplied those in both the North and South with his firearms. In 1859 he even considered building an armory in the south, and as late as 1861 sold some two thousand revolvers to Confederate agent John Forsyth.

Colt died of gout in Harford in January 1862, but in death, he became even more famous thanks to the iconic Colt Single Action Army “Peacemaker,” which could rightfully be described as the gun that tamed the West. However, although it was built on Colt’s designs it wasn’t developed until 1873, more than a decade after his death. Yet, this firearm is so associated with the Old West bears Colt’s name. That's the power of marketing, which Colt most certainly had a hand in!