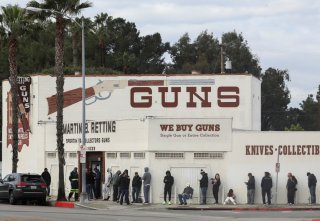 For years, gun control advocates have argued that law-abiding gun owners should be required to carry liability insurance. This week, San Jose became the first municipality in the nation to pass a measure that will put such restrictions on Americans. With the passage of the "Gun Harm Reduction Ordinance," San Jose City Council will require gun owners to have liability insurance and pay an annual fee for owning firearms.

In addition to mandating an annual fee of $25 per household, the measure requires gun owners to purchase insurance that covers losses or damages resulting from "any negligent or accidental use of the firearm," including death, injury, or property damage. Should a gun be stolen or lost, the owner of the firearm would be considered liable until the theft or loss is reported to authorities.

Gun owners will have six months to comply, the San Jose Spotlight reported, but gun owners who don't actually have the insurance won't lose their firearms or face criminal charges. It remains unclear how the legislation will be enforced.

What About the Money?

As there are upwards of 55,000 San Jose households that have at least one firearm, the annual fee is expected to bring in about $1.3 million annually. When a similar measure was first proposed in 2019, those fees were designed to offset the nearly $8 million annual cost the city incurs in responding to "firearms-related" incidents, many of which could be from illegally owned guns.

Now that the measure has passed, the $1.3 million is expected to be sent to a nonprofit that will distribute the funds to various organizations involved in suicide prevention, mental health services, firearm safety training, and victim compensation.

Yet no nonprofit has actually been set up, and it remains unclear how the money will be collected and monitored by the city.

According to reports, some fifty-one people spoke in opposition to the bill at Tuesday's city council meeting. They argued that the measure will do little to solve the issue of gun violence and instead will punish legal gun owners who haven't committed any crimes.

The National Rifle Association's Institute for Legislative Action (NRA-ILA) expressed similar concerns. In a statement, the NRA-ILA called the measure "an attempt to punish law-abiding gun owners for owning a lawful product, by making them pay for the activities of criminals. Taxing lawful ownership and requiring insurance will do nothing to reduce gun violence, which is often committed by repeat criminals who will not be paying the fees or obtaining insurance.” The NRA-ILA claimed that “it simply increases the cost for law-abiding citizens to exercise a constitutional right. Violent criminals in illegal possession of firearms cannot be required to comply with these measures, as the ordinance’s attestation requirements violate their right against self-incrimination."

Even with the measure passed, it remains to be seen if residents actually comply and whether it makes any difference in reducing gun-related crime.