With the SAR9 C, This Turkish-Based Company Could Be the New Name in Compact Firearms 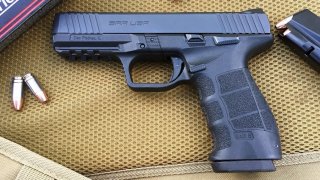 In just a few years, SAR USA has become a notable player in the American firearms industry. The company was only founded in 2018 to be the exclusive importer and distributor for the Turkish-based Sarsilmaz Firearms Corp., a privately owned small arms manufacturer that was founded in 1880 during the late Ottoman era. Today, the company has grown to become the largest small arms manufacturer in Turkey, and it operates a one-million-square-foot, state-of-the-art facility that has raised the bar for the standard in quality control for firearms.

In addition to supplying firearms to the Turkish National Police and the Turkish Armed Forces, it exports its products to nearly eighty countries including Turkey's NATO partners and other nations around the world.

The company has slowly been building up its reputation for its compact firearms, and earlier this year announced that its flagship platform of SAR9 pistols would see the addition of a compact model the SAR9 Compact (SAR9 C).

"The SAR9 Compact was inspired by feedback that we received from elite shooting professionals, dealers, and consumers," said Todd Pearson, Chief Operating Officer of SAR USA. "We listened to the shooting sports community when they asked for the same incredible durability and performance of the SAR9 in a more compact version."

Chambered in 9x19mm Parabellum, the striker-fired, lightweight polymer-framed handgun features a hammer-forged barrel with a recessed crown with low barrel axis to grip ratio to lessen muzzle climb and a twenty-degree grip angle providing superior control and fast second shot recovery. It also offers a live round indicator, as well as a safety trigger that the company said was designed to be smoother than a double-action revolver. The SAR9 Combat also includes interchangeable backstraps. Side plates provide a customized fit.

Not Too Big or Small

Designed to hit the sweet spot between a micro- and full-sized pistol, the SAR9 Compact is small enough to be easily concealable while being an everyday carrier (EDC), it still has the capacity of a full-size pistol. It comes standard with a fifteen-round magazine, while a ten-round option is available for capacity-restricted states.

The company has also announced that it has developed the SAR9 SC, a sub-compact model for security forces and law enforcement. As the smallest member of the SAR9 pistol family, the SAR9 SC still has a capacity for twelve rounds with a barrel length of eighty-five millimeters. It includes all the hereditary properties of the larger SAR9 pistols.