Sarmat: Russia's New ICBMs Have Been Decades in the Making (But Worth the Wait?) 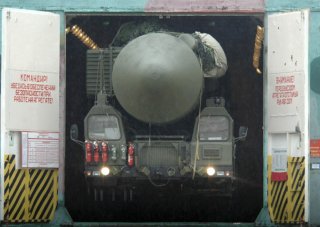 One of Russia’s farthest-reaching missiles is the SS-18 Satan. This intercontinental silo-based missile has a purported range of around ten thousand kilometers, or about sixty-two hundred miles and is equipped with a nuclear warhead. Although the Satan’s range is undeniably impressive, the missile is old. The original variant of the missile was developed nearly fifty years ago, in the early 1970, and the latest in the late 1980s—already over thirty years ago. It’s in need of a replacement—the Sarmat.

The Sarmat likely has an even greater range than the Satan. Though concrete details are difficult to come by, the range could be as great as eighteen hundred kilometers, or nearly 11,200 miles. Development started sometime in the 2000s, with an initial prototype produced in 2015. In addition to the obvious utility of a single nuclear warhead, the Sarmat is rumored to also be able to carry ten large warheads, or sixteen smaller warheads. One of it’s more novel uses is as the delivery vehicle for a hypersonic boost-glide weapon also currently in development.

Development was not always smooth though—the first test launch from a ground-based silo uncovered technical problems with the launch system equipment. The Sarmat’s introduction has been delayed several times, with initial introduction originally scheduled for 2018, then pushed back to 2021 but it currently seems unlikely that this second target date will be met.

The Rubezh is a road-mobile intercontinental ballistic missile that rides towards its launch site on a large off-road capable carrier. Like the Sarmat, initial testing experienced a few hiccups on the way to operational deployment. The Rubezh’s first launch in 2011 ended in failure when the missile experienced problems, possibly navigational in nature, and crashed not far from the launch site.

Interestingly, the Rubezh may be in violation of the Intermediate Nuclear Forces Treaty. The Rubezh’s initial flight tests utilized a specialized light-weight warhead, which gave the missile enough range (approximately fifty-eight hundred kilometers) to comply with the INF Treaty, which explicitly prohibits signatories from fielding missiles with a five hundred to fifty-five hundred kilometer range.  However, a later test used a heavier warhead, reducing the missile’s range by about thirty-eight hundred kilometers. This two-thousand-kilometer test has raised questions about Russia’s adherence to the Intermediate-Range Nuclear Forces Treaty.

Perhaps the most remarkable of these missiles is the hypersonic Avanguard nuclear boost-glide vehicle. Testing in one form or another has dragged on and on. Initial designs for the Avanguard were drawn up as far back as the 1980s. After the fall of the Soviet Union, the Avanguard’s development was paused.

As a boost-glide vehicle, the Avanguard is initially transported by a ballistic missile. Remember the Sarmat’s unique payload capabilities? It is to be the primary—perhaps only—delivery method for the Avanguard.

The development and testing of these missiles is not yet finished. Keep an eye on this topic for developments in the near future.