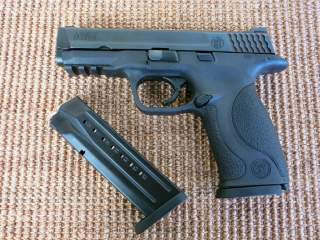 There are numerous possibilities for a pistol like the 22 Compact. Owners of M&P Compact guns can use the 22 Compact as a training weapon, shooting vast amounts of cheap .22 LR ammunition while acquainting themselves with the pistol’s design and (identical) three white dot sighting system.

One of the most useful things to have in firearms training is a handgun with the look and feel of a full-sized pistol while chambered for the low recoil .22 caliber round. The Smith & Wesson M&P 22 Compact pistol is nearly identical to a full-sized M&P Compact but significantly lighter and easier to shoot. The 22 Compact also stands on its own as a pistol for camping, target shooting, and even home defense.

Introduced in 2005, Smith & Wesson’s “Military & Police’ line of handguns was an evolution of the company’s Sigma (also known as SD) line of pistols. The SD was the company’s first polymer-framed, high capacity autoloader in the same category as the Glock 17. The Glock, which proved immensely popular in the United States in the mid-1980s, took the American market by storm and caught many U.S.-based gunmakers—Smith & Wesson included—totally off guard.

(This was first published earlier this year.)

The eventual success of the M&P spawned spinoffs in many calibers, including versions in 9 millimeter Luger, .40 Smith & Wesson, and .45 ACP. The 22 Compact externally copies the look of its larger caliber brethren but internally is different. Unlike larger M&P pistols that utilize a striker-fired operating system, it uses the energy generated from burning propellant to cycle the weapon. This makes the 22 Compact similar to such famous .22LR plinkers as the Browning Buck Mark and Ruger Mark IV.

The M&P 22 Compact is 87.5 percent the size of the M&P Compact. The use of a smaller caliber round allowed Smith & Wesson to machine the slide out of aluminum instead of heavier, stronger stainless steel. The frame is made of polymer, further reducing weight. As a result, the 22 Compact weighs just 15.3 ounces and a full ten ounces less than the larger pistol. It is a pistol that will fit comfortably in the pocket of a jacket or pair of jeans with a minimum of noticeable sag.

The 22 Compact has a 3.6-inch carbon steel barrel. The barrel is threaded at 3/8”x24 and is capable of taking 3/8”x24 or 1/2”x28 muzzle devices. This opens up the user to the possibility of equipping his or her pistol with a wide range of suppressors, muzzle brakes or compensators.

Many of the ergonomic and safety features are carried over from the larger M&Ps to the Compact, though the change in internal operating system necessitated some changes. The pistols have the same geometry and low bore axis, but the Compact lacks the replaceable back straps for achieving a custom grip fit. The pistol lacks some of the safeties typical of a striker-fired pistol but still includes a thumb safety, trigger safety and magazine safety. The thumb safety prevents the trigger from being pulled, while the trigger safety prevents accidental firing when dropped. The magazine safety prevents the pistol from being fired without a magazine in the chamber, preventing some negligent discharges.

There are numerous possibilities for a pistol like the 22 Compact. Owners of M&P Compact guns can use the 22 Compact as a training weapon, shooting vast amounts of cheap .22 LR ammunition while acquainting themselves with the pistol’s design and (identical) three white dot sighting system. The 22 Compact is an entertaining camping and plinking gun, light enough to carry in a backpack with a large supply of ammunition. The diminutive pistol could even be a self-defense weapon, light and lethal but with little recoil.

The M&P Compact 22 is an excellent choice for existing M&P Compact owners or those looking for a reliable .22 firearm. While it may not achieve the market longevity of similar guns such as the Browning Buckmark, it’s a handsome, sporty alternative to many small caliber target pistols.

(This article was originally published earlier this month and is being republished due to reader interest.)