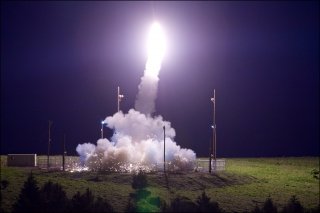 There’s a key requirement for a Glide Phase Interceptor (GPI) to destroy a hypersonic missile: The missile has to be seen.

If a hypersonic missile is traveling so quickly that it transits from one segmented radar field of view in a geographical region to another too fast, the tracking information for the missile can’t be shared fast enough to allow an interceptor to lock onto its flight path.

“We have to see something before it comes, so I’d like one capability that will allow us to see these threats globally at any time,” said Air Force Gen. John Hyten at the 2021 Space and Missile Defense Symposium. Hyten was then the Vice Chairman of the Joint Chiefs of Staff. “We can build a space architecture that can see different threats such as hypersonics, cruise missiles, and identify what those threats are.”

The Department of Defense is working to solve this problem. That’s one reason why early conceptual and computer simulation work on the GPI is being done in coordination with an emerging technology called Hypersonic and Ballistic Tracking Space Sensor (HBTSS).

HBTSS is designed to leverage a network of smaller, lower-altitude low and medium Earth orbit satellites operating as a network long-range nodes able to transmit target track specifics in real time. The idea is to track “beyond-line-of-sight” targets, enabling fire control to establish and maintain a track early in the weapons launch, then strike it just prior to its descent.

“HBTSS is on the path to launch two interoperable satellites that are built by two separate industry partners,” Navy Vice Adm. Jon Hill, Director, Missile Defense Agency (MDA) told reporters earlier this year, according to a Pentagon transcript. “So the idea is to keep competition in early, given the complexity of the mission. It is the only program within the space portfolio that provides fire control quality data down to a weapon system like Glide Phase Interceptor.”

The MDA has now awarded concept and design GPI deals to Raytheon, Lockheed and Northrop Grumman with the intent of strengthening what agency officials describe as a “layered defense.”

HBTSS could help find targets for the GPI and pass them along in seconds while a hypersonic missile is traveling to its target.

“The GPI concept fits into the MDA's missile defense architecture to provide the warfighter and its allies with reliable layered defense against regional hypersonic missile threats from rogue nations,” an MDA statement said.

The GPIs are slated to fire from ship-integrated Vertical Launch Systems using Aegis weapons systems, yet the targeting details may come from space sensors such as HBTSS which Northrop Grumman developers describe as an “integrated constellation.”

“When you look at a system like this where we have a constellation of many dozens of satellites in the future, you want to get a model of the performance of that integrated constellation. And so having the digital engineering capability and the modeling and simulation tools allows us to model the performance of those complex architectures and get to optimize the system in a way now that we wouldn't have traditionally been able to do with legacy methods,” Mike Ciffone, director, Strategy, Capture & Operations, OPIR & Geospatial Systems, Northrop Grumman, told reporters at the SMD Symposium.