Saudi Arabia is More Afraid of Jamal Khashoggi than Iran 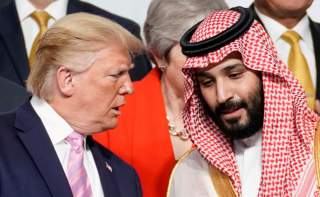 The FBI prevented another “Jamal Khashoggi incident” when they stopped a Saudi official from kidnapping Adulrahman Almutairi, a former student at the University of San Diego. Like Khashoggi, Almutairi was critical of Mohammad Bin Salman (MBS). Almutari name on MBS’ hit list reflects the ever-growing number of Saudi dissents and the increased clampdown on critics. Since 2017, when MBS became the crown prince, he has led a brutal campaign against his critics at the cost of severe human rights violations. His reforms have often served as a strategic smokescreen to consolidate power.

His gruesome domestic campaign has been implemented alongside a nontraditional foreign policy. MBS has opted for a confrontational approach with regional Arab countries, including Yemen, Syria, Lebanon, and Qatar. Further, the kingdom will no longer fund mosques abroad— a central pillar of Riyadh’s traditional foreign policy. Last month, Mohammed Bin Abdul-Karim Issa, Saudi Arabia’s former minister of justice, claimed that Saudi Arabia would no longer fund mosques outside of the kingdom. Although it’s likely that Saudi Arabia will continue funding mosques in crucial geostrategic locations, such as in Afghanistan and Pakistan, the announcement reflects a sharp shift in Riyadh’s foreign policy. Since the reign of the ayatollahs, Riyadh’s foreign policy has been centered on countering the Iranian threat. The kingdom has traditionally relied on nurturing extremist groups, cultivating cordial ties with religious leaders, and funding mosques in Islamic countries to strengthen its soft power and curb Iran’s influence in the Muslim world. The Saudi government will reportedly halt funding these mosques due to “security reasons.” In other words, domestic issues pose a larger threat to the regime than foreign affairs.

This latest foreign policy adjustment reflects a change in MBS’s grand strategy to maintain his power. The decision to stop funding these mosques doesn’t reflect a retreat or an isolationist foreign policy, rather it shows the shift in placing greater importance on domestic politics over international.

Saudi-sponsored mosques in various parts of the world are a significant source of Saudi influence and support. But the regime’s stability and legitimacy largely depend on its domestic affairs. Domestic dissent poses an existential threat to MBS’s regime, whereas his foreign policy ventures do not. For this reason, Riyadh has strategically calculated the threat from domestic dissents to be greater than the Iranian threat. Also, when rallying against Iran, Riyadh has the support of many foreign countries, including those in the West. However, when it comes to domestic affairs, Saudi Arabia fails to garner Western support to suppress its citizens.

The murder of Jamal Khashoggi was likely the catalyst that induced this shift. His assassination shed light on the regime’s brutal tactics to silence dissent and subjected the regime to wide-spread international condemnation for its human rights abuses. Prior to Khashoggi’s murder, Patrick Cockburn, a journalist for The Independent, noted that “Saudi leaders imagined that, having got away with worse atrocities in Yemen, that any outcry over the death of a single man in the Saudi consulate in Istanbul was something they could handle.” Yet, that wasn’t the case. Not only did MBS fail to receive the unwavering support from its traditional allies that it hoped for, but Khashoggi’s murder also delegitimized the regime’s credibility and reformist agenda.

Such a shift in MBS’s grand strategy would lead to even more violations of human rights as Riyadh exhausts its resources to silence dissent.

Earlier this month, the United States granted asylum to Almutairi after the FBI uncovered the Khashoggiesque plot. While the United States has often abetted and supplied Saudi Arabia to pursue is foreign ventures, when it comes to Jamal Khashoggi's, Riyadh has no reliable ally.

Sabera Azizi is a freelance writer and has a master’s degree in international relations from the City University of New York. She can be followed on Twitter @Saberaazizi.