Saudi Arabia Says It Can Restore Oil Production but What If It Is Attacked Again? 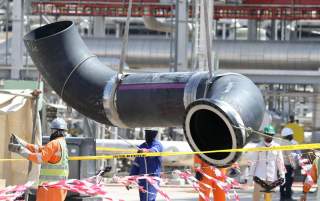 Key point: It will take a lot of work to restore oil production and Saudi air defenses aren’t as good as originally thought.

Saudi Energy Minister Prince Abdulaziz bin Salman and other Saudi energy officials held a news conference Sept. 17 to discuss the Saudi Arabian Oil Co. facilities damaged in Sept. 14 attacks. Prince Abdulaziz said that his country planned to restore all of the production taken offline by the attack by the end of September, and that 50 percent of lost production had already been restored. Saudi Aramco CEO Amin Nasser said that the crucial Abqaiq facility was now processing 2 million barrels per day (bpd) compared with 4.9 million bpd before the attack. Prince Abdulaziz added that Saudi Arabia planned to increase its national production capacity to 11 million bpd by the end of September and to 12 million bpd by the end of November. He noted that in the meantime, Saudi Arabia would withdraw oil from storage to meet export obligations — and that who carried out the attacks remains unknown.

Saudi Aramco may, in fact, be able to get most of its production back online, alleviating most initial concerns that Saudi production and exports could be affected for months. Based on visible damage at Abqaiq, Saudi estimates may be reasonable given the facility's level of redundancy. Abqaiq reportedly has a capacity of stabilizing — or removing hydrogen sulfide from oil — estimated at between 7 million bpd and 13 million bpd when at full capacity, and it appears that only about five of its 18 stabilization towers were damaged in the attack. This sort of a comeback would mean the volume of Saudi exports is likely to remain largely unaffected.

Even so, tensions between the United States and Iran have yet to lessen, and in the coming months, additional strikes on Saudi oil and gas infrastructure — including more attacks on Abqaiq — cannot be ruled out. The strikes have exposed Saudi Arabia's vulnerability to Iranian attacks. Meanwhile, Riyadh's hesitance to blame Iran despite saying Iranian weapons were involved suggests the Saudis do not want to escalate the situation out of fear that a U.S. counterstrike on Iran could generate more attacks on the Saudi oil sector. Were such a scenario to play out, Abqaiq would be even more vulnerable given that the Sept. 14 attack has already greatly reduced its redundancy.

Two Saudi Aramco processing facilities, Abqaiq and Khurais, were attacked Sept. 14 in what the United States says was an Iranian attack involving drones and cruise missiles, causing extensive damage and forcing Saudi Arabia to take 5.7 million bpd of production offline. This was the third major attack on the Saudi energy sector since early May; earlier attacks hit the East-West Pipeline and Saudi Arabia's supergiant Shaybah oil field. Saudi Aramco officials have said they will still proceed with an initial public offering, but that market conditions will determine when the listing occurs. This strongly suggests than a Saudi Aramco IPO will occur only after Saudi Arabia's infrastructure is fully repaired.

Saudi Arabia: Riyadh Delivers a Rosy Forecast for Restored Oil Production, but Vulnerabilities Remain is republished with the permission of Stratfor Worldview, a geopolitical intelligence and advisory firm.