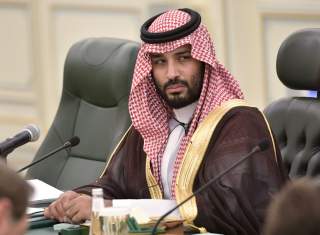 Key point: Saudi Arabia has not been able to quickly win or achieve its objectives.

Something is rotten in the Kingdom of Saudi Arabia. Prince Mohammad bin Salman, also known as MbS, was once the promising young face of the Arab monarchy. Now he’s racking up foreign-policy defeats abroad—and facing disturbing murmurs at home.

Over the weekend, Houthi rebels took down a Saudi-mechanized column along the border with Yemen, capturing hundreds of soldiers. Then, the mysterious murder of a royal bodyguard set off alarm bells inside the kingdom.

With his problems closing in, the crown prince may try one last gambit: a pivot from Washington to Tehran. But it’s risky, and he doesn’t have much room to maneuver.

“Various Saudis I've spoken to raise the possibility that what is happening could be at the hands of elements inside the Saudi government that want to embarrass MbS because they see him as putting Saudi Arabia in a corner,” said Trita Parsi, executive vice president of the Quincy Institute. “If you were a Saudi, and you were concerned about the future of your country, I don’t think it’s difficult to draw the conclusion that MbS is your first obstacle.”

MbS began his reign with an ambitious foreign policy. He pushed President Donald Trump to escalate against Iran, ramped up the Saudi-led war in Yemen, and launched a dramatic blockade against his rivals in Qatar. Now, his policies are blowing up in his face.

On September 14, drones and missiles destroyed a desulphurization plant in Abqaiq, knocking out half of Saudi oil exports. But last weekend showed that the worst may be yet to come.

The weekend of disasters began with an explosive claim by the Houthis, an Iranian-backed rebel army that has vexed the Saudi-backed government in Yemen. On a Houthi-run TV channel, Houthi Brig. Gen. Yahya Saeed announced the defeat of three Saudi brigades in a cross-border raid near the Saudi city of Najran.

It was impossible to verify whether three brigades—equal to thousands of soldiers—were actually routed, or where the battle took place. And most of the prisoners were dressed in civilian clothes.

“Some reports say that these are Pakistani mercenaries hired by the Saudis. I hear these are Yemeni soldiers who are part of the coalition forces. And the Houthis’ record on truth is pretty disputable, and pretty miserable,” claimed Randa Slim, founding director of the Initiative for Track II Dialogues at the Middle East Institute.

But the footage released by the Houthis showed images of a clear Saudi humiliation: hundreds of soldiers dropping their weapons in surrender, Houthi fighters joyriding in U.S.-made armored cars, and expensive military equipment in flames. One crewman, his pants stained with bodily fluids, surrendered his tank to Houthi soldiers armed only with rifles.

A day after the attack, the Houthis released 290 prisoners to Saudi Arabia. Both countries have been negotiating a ceasefire, and Saudi Arabia had offered a limited truce in four provinces of Yemen a day before the raid.

"The Houthis follow a model of negotiating from a position of strength, which is not unique to Iran, but Iran wields it better than almost any other actor in the Middle East," explained Foundation for the Defense of Democracies senior fellow Behnam Ben Taleblu. “You lay out conditions that you know are suboptimal for the adversary, but you induce them to want to take those conditions because of military conditions you have also created that impact the adversary’s calculus.”

Saudi authorities have been silent about the Houthi claims, but worrying reports are leaking out of the country.

On Sunday, royal bodyguard Gen. Abdulazziz al-Faghm was shot and killed in Jeddah. Saudi-run media blamed the murder on a “personal dispute” with a friend named Mamdouh al-Ali. According to a police spokesman, al-Ali murdered the general during a “heated discussion,” and then died in a shootout with local police.

Several reports immediately raised questions about the official narrative. Around the time of the murder, Saudi officials were asking “regional intelligence services” about “a number of Saudi citizens,” according to a New York Times report from Beirut and Tel Aviv. And a Saudi dissident living abroad, Ghanem al-Dosari, told The New Arab that al-Ali had been part of a team of agents who followed him to London.

Rumor-mongers threw fuel on the fire, spreading dramatic gossip about a battle within the palace. Mujtahidd, widely-followed Twitter account in Saudi Arabia, claimed that “al-Faghm was in the palace at the time of the incident and not with a friend,” and that MbS considered al-Faghm part of an “old guard” that was loyal to the House of Saud rather than the crown prince himself.

Whether or not Mujtahidd’s claims are true, they are stirring the pot inside the kingdom. The account boasts 2.2 million followers, and members of the royal family and religious establishment have taken the account seriously enough to respond to its previous claims, both directly and indirectly.

Then, another bad omen: a new $7.3 billion train station in Jeddah suddenly burst into flames on Sunday afternoon. Thick, black smoke covered the sky. Parsi said that there has been speculation about an “internal job” by anti-MbS elements.

By the end of the weekend, Saudi diplomats were springing into action, working to bring MbS a diplomatic victory on the Iranian front.

On Monday, the Iranian president’s office claimed that they had received a “message” from Saudi Arabia. The next day, Iraqi officials announced on Tuesday that they are in the process of setting up a face-to-face Saudi-Iranian meeting.

The Iranian mission to the United Nations in New York has not responded to a request for comment.

"They have been trying now for some time to convene a meeting now in Baghdad between Tehran and Saudi Arabia,” Slim told the National Interest. “There are a number of initiatives right now. But I think unlike previous times, we are now seeing both parties willing to engage in this."

The last major diplomatic breakthrough had occurred in August, when officials from the United Arab Emirates publicly met with their counterparts with Iran and began to withdraw their forces from Yemen. “The fact that UAE decided to make those public was to send a clear message to the Saudis—and to everybody—that it’s time to rethink that strategy of banking on the Americans defending them from Iran, and banking on the American policy,” Slim said.

“I think Saudi was recalcitrant in the beginning to join the UAE in this repositioning. It was hard for them to internalize the UAE’s decision on Yemen,” she added. “After the Abqaiq attack, you have seen the same kind of rethinking in Saudi Arabia of the confidence they have in the Trump administration providing their security in case of a future attack.”

Houthi leadership takes credit for the Abqaiq attack. Britain, France, Germany, and the United States have all pointed the finger at Iran. The Saudi military hedged its bets, claiming that the attack was “unquestionably sponsored” by Iran, but refusing to answer whether Iran itself carried out the attack.

Trump initially warned that he was “locked and loaded” for a response, but several days later said that it was a “sign of strength” not to attack.

It soon became clear that that military retaliation wasn’t coming, either by the United States or by Saudi Arabia.

A year after the assassination of Saudi-American journalist Jamal Khashoggi by Saudi forces, the kingdom continues to lose friends in Washington, DC. The Abqaiq attack set off a wide backlash against the idea of going to war for Saudi Arabia. A bipartisan group of U.S. senators is now ramping up the pressure on Saudi Arabia over the war in Yemen, which the United Nations says has killed 7,290 civilians and left 24 million in need of humanitarian aid.

Slim emphasized that a variety of “wild cards” could speed up—or torpedo—negotiations with Iran. But one thing is for sure: MbS will not be able to count on a bailout from the United States if his Hail Mary fails.

“As the U.S. adopts and more restrained military position in the region and signals that it is not going to fight wars for some of its allies, those allies rediscover the utility of diplomacy,” Parsi said. “This option always existed for Saudi Arabia, but as long as they thought that they could get the United States to fight the wars for it, it had no interest in pursuing diplomacy.”

Matthew Petti is a national security reporter at the National Interest and a former Foreign Language Area Studies Fellow at Columbia University. His work has appeared in Reason and America Magazine. This first appeared earlier in 2019.