The Saudis Are in Search of an Unknown Yemen Exit Strategy 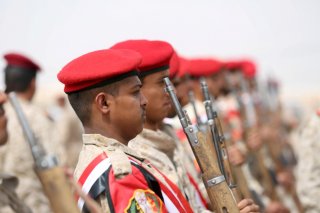 “Being so great, I have no need to beg,” Richard II informs Bolingbroke in William Shakespeare’s titular play about the arrogant monarch. Saudi Crown Prince Mohammad bin Salman (MBS) wishes he could earnestly echo such dialogue. The disastrous war in Yemen, which he started six years ago, has challenged his greatness and forced his kingdom to beg for a way out. His only lifeline may be the most detestable: the Houthis he seeks to destroy.

The conflict in Yemen began in 2014 after Houthi militants ousted the Saudi-backed Yemeni government from Sana’a, the country’s capital. The civil war devolved into a regional proxy conflict by early 2015. Saudi Arabia recruited a coalition of Gulf states and military support from Washington, London, and Paris to launch a massive bombing campaign to evict the Iranian-backed Houthi rebels from Sana’a and restore the official Yemeni government under President Abdu Rabbu Mansour Hadi. Saudi officials told the Obama administration that the campaign, known as Operation Decisive Storm, would last roughly “six weeks.”

Six years later, the operation has been neither timely nor decisive. The official government remains disorganized and feeble. President Hadi remains exiled in Riyadh. The Houthis remain undefeated. True to the Saudi operation’s name, however, the campaign has been a “storm.” Airstrikes have rained down on Yemeni civilians, killing an estimated 230,000 people and displacing four million more. And much like a blinding New England snowstorm, there is little visibility and no end in sight.

As the conflict enters its seventh year, Riyadh is searching for a way to discuss peace with the Houthis. Bargaining logic and the history of the Vietnam War offer a blueprint.

A Day Late and a Houthi Demand Short

In the most recent move toward peace, Saudi Arabia offered to reopen the Sana’a airport if the Houthis agreed to a nationwide ceasefire. The insurgents rebuffed the idea. The proposal provided “nothing new” compared to the one Riyadh had suggested a year ago. “We expected that Saudi Arabia would announce an end to the blockade of ports and airports and an initiative to allow in 14 ships that are held by the coalition,” the Houthis’s chief negotiator Mohammed Abdulsalam said. Until Riyadh lifts the blockades, the Houthis will keep fighting.

The Saudis likely submitted the offer to appease international critics and pressure the Houthis into negotiating. The ploy failed because the Houthis are close to capturing Marib, a strategic Yemeni city that serves as the country’s hydrocarbon hub and the conflict’s bloodiest battlefield. They have no need to talk peace until they fight as hard as they can for Marib. The Houthis also want to make the war increasingly costlier for the Saudis by attacking Aramco oil facilities with drones and ballistic missiles. Creating such damage could force the Saudis to leave Yemen quickly and quietly without a peace conference and without the Houthis having to make any concessions.

Thus a ceasefire, let alone peace, appears illusory. Peter Salisbury, senior Yemen analyst at the International Crisis Group, predicts both parties will seek to “improve their bargaining position” via air strikes and ground fighting. Bloomberg’s opinion editor, Bobby Gosh, forewarned the Saudis not to “expect [the Houthis] at the negotiating table anytime soon.” Onlookers and participants, however, risk unnecessarily prolonging the war by perpetuating this linear theory of war and peace.

Rarely in history has a war ended and peace neatly begun. Fighting and talking are symbiotic during wartime, especially since the odds of an outright decisive military victory are slim. Most wars end in negotiation. So Prussian military theorist Carl von Clausewitz was right: war is “the continuation of political intercourse, with the addition of other means.” The question, therefore, is not “whether” the Houthis want to negotiate, but “how” and “when” they will come to the negotiating table. Scholar Oriana Skylar Mastro’s 2019 book, The Costs of Conversation, explains that belligerents “choose the diplomatic posture that maximizes their prospects of victory and minimizes the aggregate cost of conflict.” By applying this bargaining logic to the Yemeni conflict, Riyadh and Washington can better understand the Houthi rationale and get them to the negotiating table.

What Not to Do

The worst thing Riyadh can do to exit the conflict is focus solely on preventing a Houthi victory in Marib. It is a fight the Saudis cannot win. The Houthis are determined to seize the city because it would allow them to control northern and central Yemen. Their military track record suggests they will pull off such a feat. The Houthis also have unlimited time to conquer Marib, unlike the Saudis, who face pressure from their citizens, the coalition, and the international community to end the war. The Houthis can play for time and win by default.

In this spirit, the Houthi rebels have begun to mirror North Vietnam’s attrition strategy against the United States during the Vietnam War. “Time will be our best strategist, if we are determined to pursue the resistance war to the end,” Truong Chinh, a Viet Minh chief ideologue, once theorized. By 1968, the United States began withdrawing from a conflict it had no vital, vested interest in and no chance of winning. The enemy, on the other hand, had no other objective but to win the war. In Yemen, the Saudis face an eerily similar predicament.

If Saudi Arabia only focuses on defeating the Houthis in Marib, it will either lose the city or fight a stalemate for so long that its leadership will acknowledge they lack a path to victory or a strategic interest in continuing the war. Either way, the Houthis will have the upper hand and presumably refuse to negotiate. Riyadh will have no choice but to withdraw, leaving Yemen in tatters and under Houthi rule.

Nor should Riyadh accept the Houthi’s preconditions for negotiations. History shows that these demands are bluffs. Oriana Skylar Mastro also notes in her book how states posit “maximalist preconditions that must be met before talks can begin” to “enhance the credibility of its demonstration of resiliency.” In the Vietnam War, North Vietnam issued the “Four Points.” During the Iran-Iraq War, Iran refused to negotiate until Iraqi President Saddam Hussein left power. Yet these preconditions were unnecessary for negotiations to occur. They instead let belligerents achieve two other objectives. First, the belligerent proved to their enemy that they were “in no rush to end the conflict,” bolstering the appearance of resiliency. Second, if the enemy did agree to the preconditions, the belligerent could accept the negotiation terms because they had “received significant concessions,” which would undermine charges of weakness from domestic opponents or foreign enemies.

To bring the Houthis to the negotiation table and the war, the Saudis should instead pursue one of two options.

First, they could reallocate their manpower and munitions in Marib to other strongholds. This would allow the Houthis to seize Marib—a long-time objective of theirs—and force them to recognize that they have maximized the amount of territory they can seize. Acknowledging that fighting for well-defended coalition territory would cost much and change the balance of power little, the rebels would entertain peace talks.

Second, the Saudis could entice the Houthis to pursue peace through incentives off the battlefield. In her book, Mastro concludes that the enemy’s “strategic capacity”—its ability to continue escalating, intensifying, or prolonging the fighting—determines whether a belligerent starts negotiating. The lesser the capacity, the lesser the likelihood the belligerent only fights and never talks. The Saudis can lower their “strategic capacity” towards the Houthis by creating an environment where they and their coalition no longer pose a serious threat to Houthi political aims. A similar circumstance occurred in the Vietnam War when President Lyndon Johnson announced in March 1968 that he would not run for re-election, send more troops to Vietnam, or expand the bombing campaign. Three days later, after having refused to negotiate for three years, North Vietnam agreed to start peace talks. Johnson’s unexpected decision to wind down the war undercut North Vietnamese fears of greater American involvement.

To convince the Houthis that the Saudis have no desire to continue the war, Washington should publicly specify, not just declare, its plan to cease offensive military support to Saudi Arabia. Washington or Riyadh, via a secret interlocutor, could also relay to Houthi leadership the possibility of recognizing their dominant position in Yemen and formalizing a political power-sharing agreement during negotiations.

The Houthi rebels know that a total military victory over Saudi Arabia is fanciful. They do not outright oppose negotiations. But they are looking for the right time to start talking. Saudi leaders must expand on Sun Tzu. Excelling in the art of peace, not just the art of war, requires understanding your enemy as well as understanding yourself.