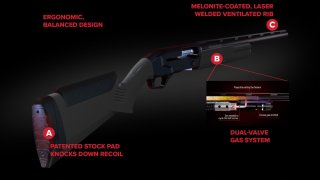 Somewhere Arthur Savage, who founded the gun company that still bears his name, might be looking down with a smile to see the innovations the company has brought to the arms industry. While Savage received his first patent for a repeating rifle with a single column magazine in 1891, just three years before he founded Savage Arms, he likely couldn’t have imagined anything like the Renegauge.

Introduced at this year’s SHOT Show (Shooting, Hunting, Outdoor Trade Show) and chosen as one of the NRA Shooting Sports USA’s ten best guns of the show, the Savage Renegauge is the first semi-automatic to carry the Savage Arms logo.

It was designed and built from the ground up and features a new dual regulating inline valve (DRIV) system that regulates pressure working the action. The patented dual valve design allows both valves to open simultaneously after a shot is fired to relieve the gas pressure and instead of sending all that back to the shooter. As a result, the twelve-gauge is able to absorb the recoil. Excess pressure to the front is instead dumped via two valves that pull only the energy required to cycle the action.

This results in consistent ejection, but less felt recoil and a lighting fast cyclic rate. Low-brass target shells and Magnum hunting shells will cycle the action with the same reliability and without any adjustment from the shooter.

“The DRIV system regulates the amount of gas needed to cycle Renegauge’s action,” said Renegauge Design Engineer John Linscott. “We have been fine-tuning the system throughout the development of Renegauge, and have been impressed with its versatility and dependability. This shotgun can handle anything, and shooters don’t have to adjust a single part of the gas system.”

The shotgun also features competition-friendly features that include an easy-loading magazine port and oversized controls, while the semi-automatic shotgun can be customized to meet the demands of shooters. This includes an adjustable stock for length of pull (LOP), comb height, drop and cast.

“Renegauge is unlike any other semi-automatic shotgun, and demonstrates our commitment to innovate as an independent company,” added Al Kasper, president and CEO of Savage Arms. “This project has been in the works for years because we wanted to enter a new category in a big way. The team in place now did an amazing job getting this to the finish line. Hunters and shooters are going to be amazed with the fit, feel, function and versatility of this shotgun. And it’s a platform we can and will build on—so look for more in the very near future.”