To Save Libya’s Future, Look Back to Its Past 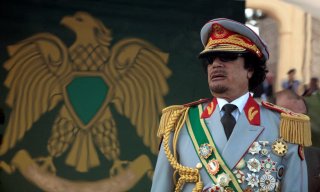 The late Colonel Muammar Gaddafi and his companions described taking power in September 1969 as a revolution. This was the perception he tried to inculcate in the minds of Libyans throughout his over forty years of tyranny. His henchmen worked hard to find an intellectual framework that would present what happened in 1969 as a revolution and not a coup. Examples of their efforts included compulsory lessons promoting pro-regime messages in the faculties of law, sociology, and political science projecting their ostensibly “revolutionary” narrative.

In order to further solidify his message, Gaddafi sought to erase all features of the Libyan state that existed before his taking power, from changing its name, to overthrowing the administrative system in what he coined “the popular revolution.” His desire to depict his overthrowing the government of King Idris as the will of the Libyan people saw him excluding any ideas perceived as opposed to his ideology. In order to discourage dissent, it was imperative for Gaddafi to project the image that the change brought about by his revolution had not taken the agency of the Libyan people away. Nothing, however, could be further from the truth.

Despite these extensive efforts and decades of oppressive rule by Gaddafi and his men, the dream of returning to a truly democratic and independent state remained a top priority in the minds of Libyans. Demands to facilitate this return were at the forefront of activities promoted by the Libyan diaspora in Western capitals. Despite the decades that Gaddafi spent trying to rebrand his coup as a revolution promoted by the people, he was indeed unsuccessful in rewriting history, seeking to erase the phrase “September coup” from history books.

Fast forward to the 2011 demonstrations which took place across Libyan cities. It was no coincidence that some of the earliest images saw the “independence flag” of the Senussi family that was deposed by Gaddafi, flying. It was the “independence anthem” which Libyans chose to play in the arenas where demonstrations that demanded the overthrow of Gaddafi’s regime took place.

What happened next, however, is key to understanding the delicate process that Libya underwent. The original copy of the anthem disappeared and was soon replaced by a forged copy, where the name of King Idris was crossed out and replaced with Al-Mukhtar. Soon, a transitional council was formed to administer the country in the areas liberated from Gaddafi’s regime.

In Benghazi, some tried to remove the independence flag and pictures of Idris. Opponents of the restoration of the House of Senussi conveniently forgot their demands for the return to constitutionality, based on their concern that the 1951 constitution, abrogated by Gaddafi, would be the one that the country would return to. All of this despite decades spent convincing the world that a return to the 1951 constitution was the only way forward. This was seen most prominently in the change of heart of the head of the Constitution Commission who was one of those who demanded, during his opposition to Gaddafi’s reign of terror, a return to constitutional legitimacy.

Indeed, it was efforts such as these that led Libyans down a route that has culminated in successive open-ended “transitional” stages that have simply perpetuated a host of rivalries, disputes, looting, bloodshed, and encouraged the overall disruption of the delicate social fabric of Libya.

The question must be asked as to why the option of returning to constitutional legitimacy, in the guise of our original 1951 constitution, was not presented among the various options that were supervised and sponsored by the United Nations?

Wouldn’t it have been safer for the state of constitutional legitimacy to have been restored, even for a transitional time period, after which a referendum would have allowed Libyans to vote and determine their own futures? Had this avenue been pursued, it is quite likely that subsequent to the February revolution against the Gaddafi regime, constitutional legitimacy could have kept the country from plunging into the bloody conflict which has ravaged it for the better part of a decade.

During the long years of Gaddafi’s rule and leading up to his eventual October 2011 assassination, victims party to the bloodshed which tore our country apart would have been thankful for constitutional legitimacy which could have stemmed such violence. After all, it was this 1951 independence constitution that their grandparents and the builders of the constitutional Libyan state had opted for, and which guaranteed the citizenship rights of all Libyans.

It is just such a solution, rooted in our history, which Libya requires today. All conventions, agreements, and arrangements imposed from outside the country will never be capable of deriving the level of legitimacy afforded by our 1951 foundational document. Libyans, alongside the international community, must ask themselves how much more grief and sorrow citizens of our country need to face before the importance of this document is understood? Indeed, Gaddafi’s coup remained exactly that, a coup, because of the legitimacy which his actions could never sustain. It is high time our country takes whatever steps are necessary to restore 1951 as an immediate solution to the divisions plaguing our country. It is the only way forward.

Dr. Abdel-Monim al-Shomani is Libyan legal expert and journalist. He has published widely in Arabic-language publications and scientific journals on the subjects of conflict and extremism. Dr. al-Shomani holds a Ph.D. in Islamic Law and Economics from Istanbul University, and lives in Marj, Libya.