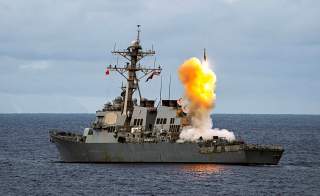 For those with stewardship of the U.S. Navy’s mine warfare capabilities, the old saying about meteorological phenomena rings true: “Everyone talks about the weather, but no one does anything about it.” Over the past several decades, the U.S. Navy has articulated a commitment to delivering robust mine countermeasures assets to the Fleet. This “aspirational” vision has yet to be realized. That might have been enough when the United States was the sole superpower with unfettered access to the world’s oceans and the littorals, but today the Navy must accelerate its efforts to field effective mine countermeasures in an era of renewed great power competition.

As Dr. Sam Taylor, Senior Leader, Mine Warfare Program Executive Office, Unmanned and Small Combatants (PEO USC), articulated in his CIMSEC call for articles, Mine Countermeasures (MCM) is one of the most difficult and time-consuming missions for navies to successfully execute. And while the U.S. Navy has made some important strides, such as the MCM package aboard the Littoral Combat Ship (LCS), the significance of the MCM mission provides both the impetus and opportunity to do much more.

In our collective Navy experience—spanning half a century—this is not a new issue for the U.S. Navy, but one it has struggled with for decades. We contend it is not for lack of want, or even a lack of funding (although MCM resourcing has lagged other procurement priorities), but rather, not having adequately mature technology to address the challenge.

As Dr. Taylor suggests, emerging technologies may offer the Navy the ability to bridge this gap and usher in a true “21st Century renaissance in MCM.” We have first-person experience with technologies that can be readily harnessed and can help the Navy up its MCM game today. We emphasize the near-term because the solution we suggest employs proven commercial-off-the-shelf (COTS) hardware and software that we believe can supply a robust MCM capability to the Navy without waiting for the lengthy planning, programming, budgeting, and execution process to deliver these assets years in the future.

Mine Countermeasures: Not a New Challenge

In terms of availability, variety, cost-effectiveness, ease of deployment and potential impact on naval expeditionary operations, mines are some of the most attractive weapons available to any adversary determined to prevent Joint or coalition forces from achieving access to sea lines of communications or the littorals.

In the past several decades, rogue states have indiscriminately employed sea mines. Libya used mines to disrupt commerce in the Gulf of Suez and the Strait of Bab el Mandeb. Iran laid mines to hazard military and commercial traffic in the Arabian Gulf and Gulf of Oman. During the Gulf War in 1990-1991, the threat of mines precluded the effective use of the Navy and Marine Corps expeditionary task force off the shores of Kuwait and hazarded all U.S. and coalition forces operating in the Arabian Gulf. The threat posed by mines was so extensive that clearance operations in this confined body of water were not completed until 1997.

Today, the threat posed by potential adversary mining capabilities is even greater. The number of countries with mines, mining assets, mine manufacturing capabilities, and the intention to export mines has grown dramatically over the past several decades. As of this writing, more than 50 countries possess mines and mining capability. Of these, 30 countries have demonstrated a mine production capability and 20 have attempted to export these weapons. In addition, the types, sophistication, and lethality of the mines available on the world market are rapidly increasing.

There is little doubt that adversary sea mines pose one of the most compelling challenges faced by the United States. It falls squarely on the U.S. Navy to provide the MCM capability to enable the Joint Force to operate forward in support of United States’ interests, as well as those of our allies and friends. Indeed, the U.S. Navy’s strategic document A Design for Maintaining Maritime Superiority 2.0 (Design 2.0) articulates the profoundly challenging strategic environment where peer competitors such as China and Russia and lesser (but more unstable) powers such as North Korea and Iran, have impressive naval mine inventories. Design 2.0 notes that, “It has been decades since we last competed for sea control, sea lines of communication and access to world markets.”1 One doesn’t have to be a Sun Tzu or Clausewitz to understand that the threat of naval mines is one of the key challenges that drives our emerging need to once again compete for freedom of movement on the world’s oceans, as well as in the littorals.

Design 2.0 also notes that the U.S. Navy will harness the increasing rate of technological creation and adoption to help shape the modern security environment to ensure that the United States prevails in any future conflict. Mine warfare is one of those key areas, and one that lends itself to harnessing emerging technologies. Sadly, other than the LCS MCM Mission Package, there has been little innovative technology adoption in this area. Dr. Taylor suggests that the Navy needs to harness emerging technologies that go well beyond the added capability coming to the Fleet through the modular LCS MCM Mission Package.

This call for action is not new. For example, in May 1998 the U.S. Navy and Marine Corps issued a document entitled, A 21st Century Warfighting Concept: Concept for Future Naval Mine Countermeasures in Littoral Power Projection.2 The publication laid out the magnitude of the worldwide mine threat and proposed solutions. But today, the threat is more compelling, simply because our adversaries now have mines which can deny us access and severely limit our ability to operate forward as a Navy and Marine Corps team.

Through the entirety of our mutual U.S. Navy experience (which began in 1969 and 1988, respectively) we have witnessed the Navy “admire the problem” of MCM. For example, in the late 1990s, Chief of Naval Operations, Admiral Jay Johnson, and Commandant of the Marine Corps, General James Jones, signed out the fourth edition of the unclassified and widely distributed Naval Mine Warfare Plan.3 Shortly thereafter came the aforementioned 21st Century Warfighting Concept: Concept for Future Naval Mine Countermeasures in Littoral Power Projection. Several years later, the Commander in Chief of the U.S. Atlantic Fleet, Admiral Robert Natter, and Commander in Chief of the U.S. Pacific Fleet, Admiral Thomas Fargo, jointly published an unclassified Carrier Battle Group/Amphibious Ready Group Mine Warfare Concept of Operations (CVBG/ARG MIW CONOPS).4

Other studies and analyses followed—both within the Navy and Marine Corps—as well as in Congressional Research Service studies, Government Accountability Office reports, think tank reports and in open defense-related media. But the recommended development persistently fell below the funding line, leaving the Navy using and modestly upgrading legacy MCM systems. An article in National Defense Magazine over a decade ago, “Navy Rethinking Mine Warfare,” heralded a new era in the way the Navy addresses the MCM challenge.5 Sadly, not much has happened since then, but it can now, by harnessing emerging technologies.

Due to the extreme challenge of putting manned naval vessels in sea areas where mines are present—witness the severe damage done to USS Samuel B. Roberts, USS Tripoli and USS Princeton—we agree with the Navy’s pivot to unmanned vehicles as a primary solution to the Navy’s MCM solution set and to “Take the Sailor out of the minefield.”6 Today, it appears the U.S. Navy does have the desire to accelerate the testing and fielding of unmanned systems.

Some years ago, Captain Jon Rucker, as Program Manager of the Navy program office (PMS-406) with stewardship over unmanned maritime systems (unmanned surface vehicles and unmanned underwater vehicles), discussed his programs with USNI News. The title of the article, “Navy Racing to Test, Field, Unmanned Maritime Vehicles for Future Ships,” captured the essence of where unmanned maritime systems will fit in tomorrow’s Navy, as well as the Navy-After-Next. Captain Rucker shared:

“In addition to these programs of record, the Navy and Marine Corps have been testing as many unmanned vehicle prototypes as they can, hoping to see the art of the possible for unmanned systems taking on new mission sets. Many of these systems being tested are small surface and underwater vehicles that can be tested by the dozens at tech demonstrations or by operating units.”7

Speaking at the January 2018 Surface Navy Association Symposium, Captain Rucker continued the drumbeat of the bright future for unmanned maritime systems, noting, “We have been given special authorities to do accelerated acquisitions,” and referenced several USV and UUV programs. He noted that the Chief of Naval Operations, Admiral John Richardson, as well as the Assistant Secretary of the Navy for Research, Development and Acquisition, Mr. James Geurts, have been proactive in advocating the accelerated development of unmanned maritime systems. Captain Rucker concluded his remarks by explaining how the Navy will insert unmanned maritime systems into the Fleet:

“As the technology is ready we will insert it into the systems we’re developing, every system I show you, whether it’s an unmanned surface vessel or unmanned undersea vessel, we are ensuring that we develop that modularity and have the interfaces, so as technology is ready we can insert it into the production line—not break the production line—and ensure we stay on track to deliver that capability.”8