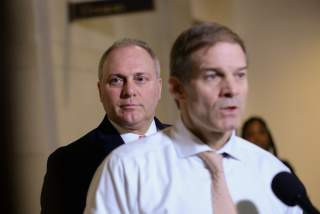 House Minority Whip Steve Scalise told reporters Tuesday that the impeachment inquiry is a “one-sided, Soviet-style process.” The Louisiana Republican, joined by Ohio Rep. Jim Jordan, added that this was the only impeachment inquiry “in the history of our country” that was taking place behind closed doors and under such strict rules.

The two lawmakers attacked Schiff after Lt. Col. Alexander Vindman’s testimony Tuesday, where he was expected to talk about how he objected to and reported concerns about Trump’s phone call with Ukrainian President Volodymyr Zelensky. They accused Democrats of blocking witnesses from answering questions.

“They’re trying to impeach a president behind closed doors without due process,” he continued.

Jordan added that Schiff prevented lawmakers from asking about who the witness spoke with, and asserted that the chairman “has prevented the witness from answering certain questions we have during the deposition.”

The Ohio lawmaker noted that knowing who the witnesses are is important so that America “can get the facts” and “the truth.”

“It seems interesting to me that chairman Schiff is so sensitive,” Jordan said.

Schiff objected to a line of questioning from Republican lawmakers Tuesday, with Democrats contending that it was an effort by conservatives to figure out who the whistleblower is, CNN reported. Republicans pushed back and said they were simply trying to get information on who Vindman spoke with.