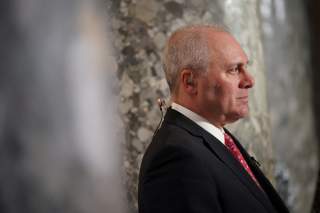 Scalise, a Republican U.S. representative from Louisiana, appeared on “Fox News Sunday” to speak about what lies ahead for the impeachment process in Congress. Now that the Democratic-led House of Representatives has voted to impeach the president, all eyes are on how the GOP-controlled Senate will proceed. House Speaker Nancy Pelosi must first deliver the articles of impeachment, but she has yet to do so.

Scalise contended that Pelosi knows her party’s case against Trump is weak.

“Maybe she’s trying to carry out her own quid pro quo by acting as if she’s got some kind of role in the Senate trial. They had a weak case,” the Louisiana lawmaker said. “I think she knows they had a weak case. There was no evidence and no crime committed. And, yet, they still wanted to impeach the president to appease their radical base.”

“That’s what this was about from the beginning,” he added.

“They’re talking about more impeachments next year. How about they focus on lowering drug prices, securing our border, doing an infrastructure package that they could have done in a bipartisan way? They don’t want to do any of that because they’ve become the party of impeachment,” Scalise continued. “They have this obsession, it seems like, with carrying out this political vendetta that they have against the president, instead of working with them to get things done.”

In contrast, Scalise said the White House is focused on growing the economy and raising incomes for working families in the country — a goal he said both parties should be working toward.

The House voted to impeach the president on Dec. 18 following months of debate. Representatives voted on two separate articles of impeachment, with the first pertaining to the abuse of power article (230-197) and the second on obstruction of Congress (229-198). The proceedings garnered zero Republican votes. Hawaii Democratic Rep. Tulsi Gabbard chose to vote “present” on both articles, to the immense chagrin of her party.

The impeachment effort is widely expected to die in the GOP-led Senate. Scalise maintained that, unlike in the House, an impartial trial will take place in the upper chamber of Congress.

“So, in the end, look, the Senate’s going to conduct a fair trial. I have confidence in [Senate Majority Leader] Mitch McConnell doing that,” he said. “There was not a fair trial in the House, and I think that was very clear. And you see what Pelosi did there, literally shutting down the ability for the minority to even have a day of hearings, which is required under House rules. They broke that rule.”

“Their star witnesses said, under oath, when asked, ‘Can you name an impeachable offense? Was there any bribery?’ — every one of them said, ‘No.’ And, yet, they still carried on,” Scalise said.