Scary Fact: The Russian Navy Can Still Take on America and NATO 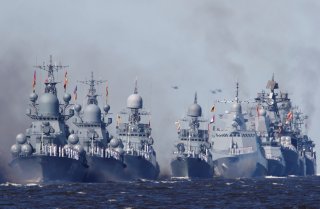 With only one aircraft carrier and less than one-third of the number of destroyers operated by the U.S. Navy, Russia’s Navy may not seem to present a pressing or extremely serious threat to U.S. and NATO naval forces in the Black Sea.

This apparent reality is not stopping Russia from pursuing a transparent and vigorous effort to massively expand its Black Sea presence and firepower. This Russian process has been underway for several years now, according to Russia’s news agency TASS, which reported on May 13 that the Russian Black Sea Fleet will give seven new combat ships this year.  This comes just one year after Russia’s Black Sea Fleet received seven new ships last year, TASS also reported.

While small and seemingly less threatening to a sizable and high-tech U.S. Navy, not even including its considerable support from NATO allies, the Russian Navy still presents a credible threat.

If Russia is adding new warships, then what kinds of warships are they? Of greatest significance, what kinds of weapons, radar and sensors might they operate? Answers to these questions will likely reveal the true scope of the rising threat.

Russian Naval threats would indeed become much more pressing should TASS reports of a hypersonic missile-armed Frigate operating in its Northern Fleet be accurate. Referring to Russia’s new Frigate as a first in class for its Northern Fleet, TASS reported that the new warship was headed into the Baltic Sea area for a new series of maritime combat test firings and operations.

“The warship of this class was unveiled to the public for the first time. All those who wished so could go aboard the warship, which had been the first in the world to test-fire hypersonic missile weapons,” TASS states.

While short on aircraft carriers, destroyers and other large platform warships, the Russian Navy not only has a concerning fleet of high-tech, heavily armed sixty-four submarines but also operates as many as eighty-five Corvettes and fifty-five patrol boats, according to GlobalFirepower.com. Smaller, faster and more maneuverable ships such as patrol boats and Corvettes could prove particularly threatening in the coastal areas of the Black Sea bordering sensitive areas to include coastline from several NATO allies such as Bulgaria and Romania. Aircraft carriers would be more likely to launch offensive attacks, however, Russia’s one aircraft carrier could potentially launch fighter jets in the Black Sea to intimate Western forces on patrol, yet the thrust of Russia’s surface fleet may be better suited for coastal defense. Shallow draft Russian Corvettes and patrol vessels would be able to operate in vital areas less accessible to larger, deeper-draft U.S. Navy ships. This would strengthen Russia’s coastal defense posture with more agile, maneuverable armed Corvettes and patrol boats.