Schumer and Schiff Are Wrong: Impeachment Is Not Congressional 'Oversight' 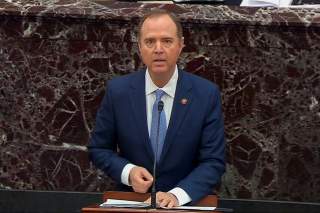 The impeachment trial of President Donald Trump has begun. The initial arguments about the rules for the trial revealed some important issues that already need clarification.

First, Senate Minority Leader Charles Schumer (D-N.Y.) and Rep. Adam Schiff (D-Calif.), the lead House impeachment manager, claim that impeachment is simply part of Congress’ general exercise of “oversight” of the executive branch. Presumably, they think this spin will make senators more willing to demand that the Trump administration turn over documents and provide individuals to testify in the trial.

Senators should not take the bait. The House’s own website explains that the “Constitution says nothing about congressional investigations and oversight.” Any such authority, the House tells us, stems from Congress’ legislative authority. The Supreme Court has held that Congress’ power to investigate may be broad, but it must be related to “legislative purposes.” That’s oversight.

Second, before the trial began, Schumer said that the impeachment trial rules proposed by Majority Leader Mitch McConnell (R-Ky.) are “not even close” to the rules adopted for President Bill Clinton’s impeachment trial. McConnell’s rules resolution, Schumer said, is literally one of the “darkest” moments “in Senate history.” If that sounds a bit over the top, it is.

The Clinton rules and the McConnell resolution define the House impeachment record the same way, as “publicly available materials that have been submitted to or produced by the House Judiciary Committee.” These materials include transcripts of public hearings or mark-ups. The Clinton rules say that this House record “will be admitted into evidence” and, while the McConnell resolution initially said the record “may be admitted into evidence by motion,” that difference has now been eliminated. Since the entire record has been publicly available for weeks, and access is much easier than it was 20 years ago, that was not much of a difference anyway.

Both sets of rules provide for motions to be filed, argued, and voted upon. Both provide up to 24 hours each for the House and Trump to present their cases and, while the Clinton rules did not cabin that time further, the McConnell resolution says it must be completed within three days. Both sets of rules allow for a motion to dismiss and, if the Senate decides to subpoena witnesses, requires that the decision about those witnesses testifying will be made after they are first deposed.

It is actually the Democrats’ demands, not McConnell’s resolution, that are most at odds with the Clinton impeachment trial. House Democrats first refused even to choose impeachment managers or bring the articles to the Senate until the Senate agreed to structure the trial to the House’s liking. Now that the trial has started, Schumer has already offered an amendment to the rules resolution to issue a series of subpoenas – before knowing whether they are needed.

During the Clinton trial, the decision whether to issue subpoenas did not occur until after both sides had presented their case, after senators were able to ask questions, and after a motion to dismiss had been made. Now, Democrats want the Senate to issue subpoenas before any of that has occurred.

Third, the arguments about the trial rules re-emphasized the need to clarify President Trump’s impeachable offense. The first impeachment article adopted by the House claims that “President Trump solicited the interference of a foreign government, Ukraine, in the 2020 United States Presidential election.” It is this alleged “corrupt purpose” or “corrupt motive” that transformed otherwise legitimate actions into impeachable offenses.

As the trial began, Schumer again said that Trump tried to “blackmail a foreign country…to help him win an election.” Schiff said that Trump sought to “compel Ukraine to help him cheat” in the 2020 election. This has been the talking point for witnesses before the House Intelligence and Judiciary Committees, and Trump’s critics have said it thousands of times.

There’s a lot more to come, of course. The Senate’s impeachment trial rules provide for any senator to ask that questions, such as the admissibility of evidence, be decided by the full Senate. There’s no way to know at the outset how often that will happen, or how much time that will add to the trial timeline. But the first day has shown the need to clarify that impeachment is not oversight, that the rules proposed for the Trump trial are similar to those used in the Clinton trial, and that everyone should watch for actual evidence of Trump’s purpose or motive.

A senior legal fellow at The Heritage Foundation, Thomas Jipping is deputy director of the think tank’s Meese Center for Legal and Judicial Studies.