The Science of Nuclear Explosions 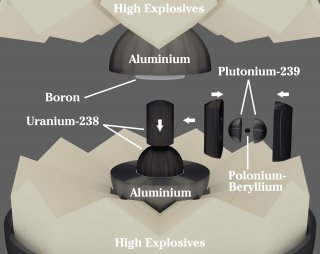 What makes nuclear weapons different from every other weapon? As we approach the 75th anniversary of the testing of the first atomic bomb, it is worth taking a closer look at the most powerful weapon ever invented

Most national security experts are familiar with fission and fusion. The atomic bomb, first tested on July 26, 1945, gets its explosive force from a fast neutron chain reaction that splits a trillion trillion uranium atoms in a microsecond. The hydrogen bomb, first tested by the United States and then the Soviet Union in the early 1950’s, uses the heat, radiation and pressure of the atomic bomb to force atoms of hydrogen together, releasing by this fusion even greater energy than by fission.

How exactly does this work? Where does the energy come from? NASA Astrophysicist Dr. Michelle Thaller explained the science of nuclear explosions this week on the national security podcast, Press The Button.

“One of my naive questions as a kid was how can you get energy from both splitting atoms apart and putting them together?” said Thaller.  “So, if I take the atom and rip it apart, I get energy. If I take an atom and I put it together, I get energy. This all has to do with this thing called the strong force.”

There are four fundamental forces in nature, Thaller told me. “Gravity seems like a pretty strong force. It keeps the earth orbiting around the sun and it keeps us on the surface of the earth,” she said, but electromagnetism “is much, much stronger. 10 to the 36th power stronger. That’s a 1 followed by 36 zeros.”

Electromagnetism is why we are able to exist. The atoms in our body repel the atoms in a chair and the ground and “we don’t just fall through the chair, all the way into the center of the Earth.”

But the really powerful forces are two that we never see: the strong and weak nuclear forces. “The strong force is named because it is a very strong force. So, if gravity is 1, this strong force would be 10 to the 38th - that’s a 1 with 38 zeros behind it,” she said.

Thaller, known for her hosting of the Science Channel show, How the Universe Works, explained, “We don't notice these forces in our everyday life because they are felt only over tiny, tiny scales. Basically, fractions of a distance across a single proton or a neutron.  If you can build a bomb that kind of plays around with releasing energy from these nuclear forces, you can build something very powerful indeed.”

Understanding the strong force helps explain fission. “You have a very large nucleus like uranium that is barely holding together. It's so big, the strong force can't hold it together very well,” she said. “Instead, what happens is if you input a little bit of energy and disturbed the nucleus - in this case, adding an extra neutron - all of a sudden the nucleus splits apart and the two nuclei that are leftover are much more tightly bound. They can feel that strong force much better. So, each of those two smaller nuclei now are relaxed into this lower energy state of the different binding energy state.” The extra energy is released in the form of heat and radiation.

Three events happen during fission. Firing a neutron at the right isotope of uranium (the largest element found in nature) causes it to split into two smaller atoms while simultaneously spitting out an average of two neutrons. These neutrons go off and find their own uranium atoms to split, which generate more neutrons - from two to four, then, eight, then sixteen, and so on. This is the chain reaction that can start from a single neutron.

Each fission converts a small amount of the mass of the atom into energy. The first scientists to discover fission applied Einstein’s famous formula, E=mc2, and quickly realized that even this small amount of matter (“m”) multiplied by the speed of light squared (“c2”) equals a very large amount of energy (“E”).  One small bomb could equal the destructive force of even the largest bomber raid.

The core of the Hiroshima bomb contained about 140 pounds of uranium, with about two pounds that underwent fission. “The amount of mass that was converted into pure energy was about half a dimes’ worth of mass,” explained Thaller. “So, if you think about a dime coin, break it in two – that’s about how much matter disappeared and was converted into pure energy,” producing an explosive force equal to 15 thousand tons of TNT.

Conversely, for small atoms like hydrogen, energy is produced by fusing them together. “As you fuse more and more of these particles together, the strong force is able to really get it back together. It releases energy by relaxing. That’s called a lower binding energy state,” said Thaller. It may be relaxing for the universe overall, but the energy released at the point of these reactions is enormous. “Hydrogen bombs are many, many, many times stronger. In the case of Hiroshima, you were dealing with things that were in kilotons of TNT, thousands of tons. For hydrogen bonds, you're dealing with, with megatons, or millions of tons of TNT.”

It is amazing that human beings understand this and are able to manipulate matter and energy at these fundamental levels. Thaller, however, is worried about humanity’s ability to use this knowledge wisely.

“It’s hard to understand why we use all this knowledge for destructive purposes,” sighed Thaller. “As a scientist at NASA, I know that we have more than 30 different earth science satellites that are all describing what's happening to our planet right now in terms of how fast the climate is changing and what we're doing to the planet. We have that knowledge and we don't seem to be doing anything good with that knowledge, at least not yet.”

Thaller’s scientific colleague at NASA conservatively predicts that as a result of global warming, ocean levels “will rise about three feet by the year 2100, about eighty years from now,” she said. “There are a lot of areas of the world that are low lying or close to the coast and this could potentially cause a billion people to have to move. They'll either become refugees and have nowhere to go, or we'll have to find places for these people to go.

“And we have all these people sitting on nuclear weapons. A mere three feet sea level rise will get rid of most of Bangladesh. There'll be hundreds of millions of people trying to move into India and China,” warns Thaller. Historically, large migrations have triggered wars. “Will this kick off a big confrontation? I see that coming and then that's what I'm really worried about.”

Dr. Thaller’s complete interview can be found here on Press The Button.

Joseph Cirincione is president of the Ploughshares Fund.