Scotland Launched an Invasion During the Black Death. Does History Tell China to Attack Taiwan? 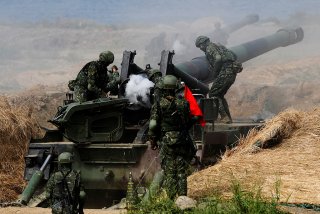 When the Black Death ravaged Europe in the mid-fourteenth century, the soldiers of Scotland saw opportunity in crisis. First hitting England in 1348, the plague’s deadly spread across the country spurred the Scots to perceive an ideal moment to conquer their neighbors by staging an invasion of northern England in 1349. Might a power in today’s coronavirus-stricken world take advantage of temporary alterations to the global strategic environment for its geopolitical gain?

It is a cliché in diplomacy to point out that the word in Mandarin for crisis, wēijī, contains two syllables roughly translating to “danger” and “opportunity.” Whether or not that interpretation is wholly accurate, today’s coronavirus crisis surely presents a potential strategic opportunity for Beijing—one that it may already be seizing.

In the last month alone, China has sunk a Vietnamese fishing vessel in international waters, sent an aircraft carrier-led flotilla past Taiwan’s coasts, flown aircraft near Taiwanese airspace, and continued its efforts to militarize land features in the South China Sea. As U.S. State Department spokesperson Morgan Ortagus declared on April 6, “We call on the PRC to remain focused on supporting international efforts to combat the global pandemic, and to stop exploiting the distraction or vulnerability of other states to expand its unlawful claims in the South China Sea.”

Chinese militarism this year may be added to the long list of daring coups de main throughout history, as the global disruptions caused by coronavirus might very well feature a repetition of the Scots’ pandemic-inspired aggression nearly seven centuries ago. Trouble could very well lie ahead for Taipei, for there exist at least five rationales for Beijing to antagonize or even invade Taiwan in the coming months.

First, the coronavirus pandemic has at least mildly disrupted global militaries’ normal operations, not least those of the U.S. Navy. An alarming twenty-six U.S. Navy ships have reported coronavirus cases, most prominently the USS Theodore Roosevelt. Second, in January Taiwanese president Tsai Ing-wen won reelection in a stark rebuke of Beijing, carried by a policy platform of preserving Taiwanese sovereignty. Third, President Tsai’s surprise landslide victory was a result of the Hong Kong protest movement exposing the failure of China’s desired model for Hong Kong—economic integration with the mainland and gradual political tightening. Clearly that model will not work with Taiwan, either.

Domestic politics matter, too. A fourth factor is that it is no stretch of the imagination that Chinese president Xi Jinping did away with presidential term limits in 2018 in order to realize a personal dream of reuniting Taiwan with the mainland during his tenure in office, fully knowing that it would not feasibly be accomplished within his second term. Finally, reunion would be a monumental achievement for Xi if realized in time for the 2021 centennial of the Chinese Communist Party’s founding.

Put simply, coronavirus may put Taiwan in China’s crosshairs as much as the bubonic plague put England in Scotland’s sights. Sure, Scotland acted as the Scottish Wars of Independence had already raged for decades, whereas the cooler contest between Beijing and Taipei has not erupted into violent armed conflict—at least not yet. The plague first afflicted England before Scotland, whereas in 2020 the coronavirus emanated out of China, with Taiwan demonstrating one of the world’s strongest public health responses. And the Scotland-England rivalry was more regional compared to the global strategic showdown Taiwan finds itself entangled in between China and the United States.

Yet the American role only underscores the profound risks of the coronavirus pandemic, as Taiwan’s chief geopolitical champion finds itself worst afflicted by the virus, recently seeing reported cases soar over one million and deaths over 58,000. Astonishingly, more Americans have now passed from coronavirus than the total number of Americans who died in the Vietnam War.

Would Beijing not be wise to capitalize on this favorable strategic situation to achieve what it considers to be perhaps its top geopolitical objective? It would benefit leaders in Zhongnanhai for them to read to the end of the Scottish story, which carries for them an important lesson in humility. Amassing their army in the forest of Selkirk, the Scots’ close quarters proved the ideal incubation ground for the plague, killing 5,000 troops. Rather than pursue their invasion any further, they retreated home, bringing the devastation of the plague home with them. A full third of the Scottish population perished.

As with failed Scottish adventurism then, the strategic costs of a Chinese invasion of Taiwan would almost certainly outweigh its benefits, with an international backlash in both hard and soft power terms inevitable, not to mention the ongoing infectiousness of coronavirus posing a threat to the Chinese military and populace. What may seem to be a window of opportunity would become a chance for China’s foreign policy to epically backfire. Beijing today would do well to learn from the Scottish folly of 1349.