Sea Monster: This Russian Navy Boat Was Piloted By The Air Force 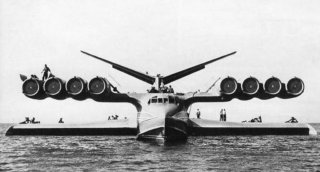 Ground effect vehicles are a bizarre lot. Part plane, part ship, they look like something out of a science fiction movie. These vehicles exploit a quirk in aerodynamics — the ground effect, in which an increase in lift and decrease in drag is experienced when close to the ground — which gives them a great deal of lift despite having small, stubby wings.

They are able to fly very quickly, but stay quite low to the ground, around 15 feet or so.

Completed in 1966, the Caspian Sea Monster as it is known, was the largest aircraft ever, at least at the time of its manufacture. This massive ekranoplan was powered by eight (yes, eight) engines and had an incredibly massive takeoff weight of 544 tons.

Like all ekranoplans, its cruising altitude was limited, around 15 feet. This was actually an advantage, as flying so low would help the Caspian Sea Monster avoid radar detection.

Its speed, considering its maximum take-off weight was also substantial. Cruising speed was reportedly over 250 miles per hour, with a maximum speed of over 300 miles per hour.

This massive speed, combined with enormous payload made the Monster very appealing. Large numbers of infantry, as well as armor could be rapidly transported and deployed across large bodies of water, without being as vulnerable or slow as surface ships, and low enough to escape radar detection.

The Caspian Sea Monster was the only of its class ever built. In an administrative quirk, the Monster fell under the authority of the Soviet Navy, though the Caspian’s pilots were Air Force.

This video gives you a sense of how massive the Caspian Sea Monster was. It’s ridiculous. It was fitted with 6 P-270 Moskit missiles that were designed to take out NATO battle groups when nuclear-tipped. They were otherwise tipped with conventional explosives.

In 1980, the Monster suffered an accident in the Caspian Sea and sank. Too heavy to recover, it remains at the bottom of the Sea.

Other, smaller ekranoplans were built by the Soviet Union ostensibly for beach assault. The A-90 Orlyonok was equipped with landing gear for just this purpose. The A-90 was capable of flying at 250 miles per hour — but had an exponentially higher flight ceiling, at 3,000 feet.

The A-90 has a contra-rotating turboprop mounted on its tail — the most powerful turboprop ever made, invented by Nazi airplane designers captured by the Soviet Union.

Check out these photos of an old Soviet ground effect vehicle too, it’s huge.

There are also reportedly plans to revive the ekranoplan design for use in the arctic. Apparently plans call for flight testing in 2022-2023. Is this a realistic plan, or just another unrealistic announcement? Only time will tell.