Sea Showdown: Russia vs. Ukraine in the Sea of Azov 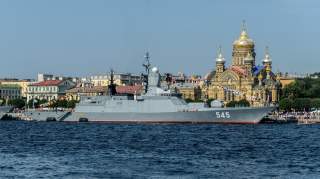 Russian reports discuss Ukraine’s apparent plan to build a new naval base at Berdyansk about thirty miles west of Mariupol on the Sea of Azov. Any glance at the map reveals that all ships transiting into the Sea of Azov, whether Russian or Ukrainian or flying other flags, must transit the Kerch Strait and thus pass under Russia’s new bridge that was completed earlier this year.

The story of astronauts Nick Hague and Alexey Ovchinin careening back toward Earth in a daring and successful escape from a failed space mission was stirring to be sure. Even as Russian intrigues swirl around every corner in Washington, some of the “best and brightest” of both countries have engaged in a joint, high-tech endeavor for the most honorable goal of exploring the scientific mysteries of space and Earth. Leaders in Moscow and especially Washington may want to study this exemplar of Russian-American cooperation under pressure.

(This first appeared last month and is being reposted due to breaking events.

The sad reality is this extremely crucial bilateral relationship is in dire straits—even worse than many likely imagined. As the current U.S. president is excoriated on a daily basis for being “pro-Russian,” the chances of great-power conflict in either Syria or Ukraine have escalated precipitously. When, in February 2018, a group of U.S. special forces killed a large number of Russian mercenaries in Syria, Moscow warned Washington starkly “not to play with fire.” A couple of months later, U.S.-built Javelin anti-tank missiles arrived in the volatile Ukraine situation. The Obama administration had steadfastly refused to give Kiev such lethal aid, knowing that escalation of the conflict would benefit no one, least of all Ukrainians.

Yet, Trump’s myriad hawkish advisors have prevailed and thwarted the president’s attempts to improve relations with the Kremlin. If the anonymous opinion piece of Sept 5 regarding “internal resistance” to the president is accurate, then the total demolition of U.S.-Russian relations seems to be a major thrust of this defiance to the president’s authority. Perhaps these hawks will be finally sated when Americans and Russians are killing each other in earnest? Let’s all hope that the bloodbath would stop before an exchange of nuclear weapons.

Unfortunately, most Americans are too obsessed with the workings of Facebook and Twitter—discussed in connection with Russia with nauseating regularity in the conventional press since 2016—to know what is actually going on in U.S.-Russian relations. Thus, few Americans and hardly any international relations scholars seem to be aware that U.S. Army tanks and armored vehicles have deployed beyond the confines of the North Atlantic Treaty Organization and directly into Georgia earlier this year, while U.S. Air Force planes will be operating from an airfield inside of Ukraine over the next month as part of NATO Operation Clear Sky.

Most American international relations specialists have eschewed the idea of either Ukraine or Georgia joining NATO—a prudent choice given the risks. But it is evident that American military forces are determined to operate in these countries, whatever the hazard. There was justified concern in the early summer of 2018 that if the Javelins caused significant Russian casualties in east Ukraine, then the Kremlin would once again intervene decisively, as it did for example in the Debaltseve battle of February 2015. For good measure, Russia obviously did not want the Ukraine crisis to explode during the World Cup. Now, things could be different and tensions are building ominously, especially in and around the Sea of Azov.

Signs of imminent trouble are apparent everywhere. At the end of August, the rebel leader Alexander Zakharchenko was killed in a bomb blast. As usual, Moscow and Kiev traded blame for the killing. To state the obvious, such assassinations hardly bode well for permanent stabilization through a negotiated settlement. In September, the Ukrainian President was in America to speak at the United Nations. He visited Baltimore to take possession of two aging U.S. Coast Guard cutters. While these ships are hardly likely to tip the military balance in the tense Black Sea area, they come at a time when the Russian military press is rather hotly discussing Kiev’s intention to “take steps to increase its military presence in the Sea of Azov [мероприятий по усилению военного присутствия в Азовском море].” Hopefully, Ukraine will have better luck operating old U.S. Coast Guard cutters than has the Philippines. Washington seems to think that such “gifts” will help the morale of various beleaguered friends, but these symbolic steps also inevitably provoke the ire of neighboring great powers without actually providing any genuine deterrent power. In other words, such policies make for good public relations stories, but little else.

Russian reports discuss Ukraine’s apparent plan to build a new naval base at Berdyansk about thirty miles west of Mariupol on the Sea of Azov. Any glance at the map reveals that all ships transiting into the Sea of Azov, whether Russian or Ukrainian or flying other flags, must transit the Kerch Strait and thus pass under Russia’s new bridge that was completed earlier this year. Two Ukrainian Gyurza-M armored cutters [бронекатер] are said to already be in the Sea of Azov. Two other Ukraine Navy ships had passed under Russia’s Crimean Bridge without incident at the end of September. A Russian article noted that the ships were under close observation by the Russian Coast Guard, but that they passed the tense strait “quietly [спокойно]” and “without a battle [без боя].” The latter remarks seems to have been sarcasm. It was noted that the larger of the two Ukrainian Navy ships was nearly fifty years old.

But lest anyone feel calm about this sparring, people are killed every day in the fighting in eastern Ukraine and civilians are suffering horribly. Moreover, there is more than enough spy intrigue going on to set neighbor against neighbor. About a week ago, yet another Ukrainian ammunition dump went up in flames under mysterious circumstances. It is into these volatile circumstances that U.S. combat aircraft (F-15s) from the California National Guard have flown into. True, the air base they are operating out of is well west of Kiev, but still just a few hundred miles from the tense Sea of Azov. Nevertheless, a Russian perspective holds that NATO exercises in western Ukraine “are connected with a different exercise undertaken by the Ukrainian armed forces . . . near the Russian border in the waters of the Sea of Azov from October 9–12 [будут связаны с другими учениями украинских войск, которые пройдут вблизи российской границы в акватории Азовского моря с 9 по 12 октября].”

That article claims that Russia is at “zero-hour” and the subhead maintains: “The U.S. and NATO are preparing Ukraine for a local war with Russia [США и НАТО готовят Украину к масштабной войне с Россией].” It goes on to say that very large-scale NATO war games involving forty-five thousand troops will be held in October and November 2018 in northern Norway.

If one sees Russia as a deeply paranoid and relatively weak country (albeit endowed with many good writers and composers) with defense spending amounting to a paltry sum against the NATO aggregate, these exercises seem ill-advised, to put it politely. New research in the journal World Politics confirms what we all long suspected—great powers are especially prone to undertake aggression after suffering significant humiliation. Conducting major NATO military drills along Russia’s sensitive borders and in highly unstable areas of the former Soviet Union is the opposite of wise restraint.