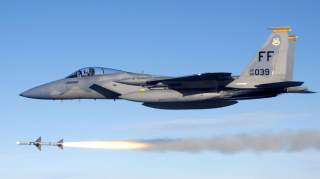 ‘The capability of the F-14A to snap around during the dogfight was unequalled at the time. Even today [once again we have to remember the book was published in 2004], I’m sure that anything but the F/A-18 or F-22 would be hard pressed to beat it. After only 100 hours of training I learned to pitch the nose of my F-14 up at 75 degrees AOA in just over a second, turn around and acquire my opponent either with the AIM-9 or the gun.

`The F-14’s only weak point was its TF30 engines, which were unreliable. We had to learn to fly them — not the airframe. The engines were always a problem on the F-14. Nevertheless, under certain flight conditions they develop just over 20,000 lbs of thrust each. That’s enough for the F-14A to stand on its tail and hold an indicated airspeed below 85 mph and 40 degrees AOA. This is possible due to the large “stabilators” — a combination of elevators and horizontal stabilisers. Dual rudders for directional control also provide roll control at medium and high AOA.’

IIAF studies were indicating these advantages, and the Shah — himself an experienced pilot — got them confirmed during briefings by US Navy officers. Very soon there was little doubt about which aircraft would be acquired. Rassi concluded:

`We couldn’t care less about what some in the US called “selling” the F-14s to Iran. It’s totally naive to believe that a show organised for the Shah would make any reasonable and responsible person decide to spend billions of dollars, train thousands of personnel, spend additional millions to build support facilities and thereby influence the future of the whole air force for the following 30 years on the basis of “the F-14 display was better than the F-15”! No way. We knew better than to be influenced by the stunts of American pilots.

`We were searching not only for a fighter superior in manoeuvrability and weaponry, but also for a highly flexible area defence interceptor. We wanted a complete system, including superior sensors, effective long range weapons and man-machine interface that would need little or no outside support. We simply couldn’t ignore the F-14. Its performance during the war with Iraq confirmed our decision beyond any doubt.’

As John C. Bierwirth, back then chairman and chief executive officer of Grumman, said in Arthur Reed’s book F-14 Tomcat: `The F-15 and the F-14 are both first-class aircraft. They’re both very good, and they have slightly different purposes. The F-14 is basically designed to give you air superiority to handle any air threat, be it missile or aircraft by itself. It is bigger than the F-15, because has to carry more, and the F-15 is a little faster. The F-15 is designed to fly over the ground you control. And if you control the ground underneath, you then supply your own missile capability from the ground, your own long-range radar on the ground, and your own computer in the control centre on the ground. The F-14, being a navy ‘plane and flying over water, has to carry this capability with it.