The Secret Is Out: Here’s The Killer Cannon the Marines and Navy Will Love 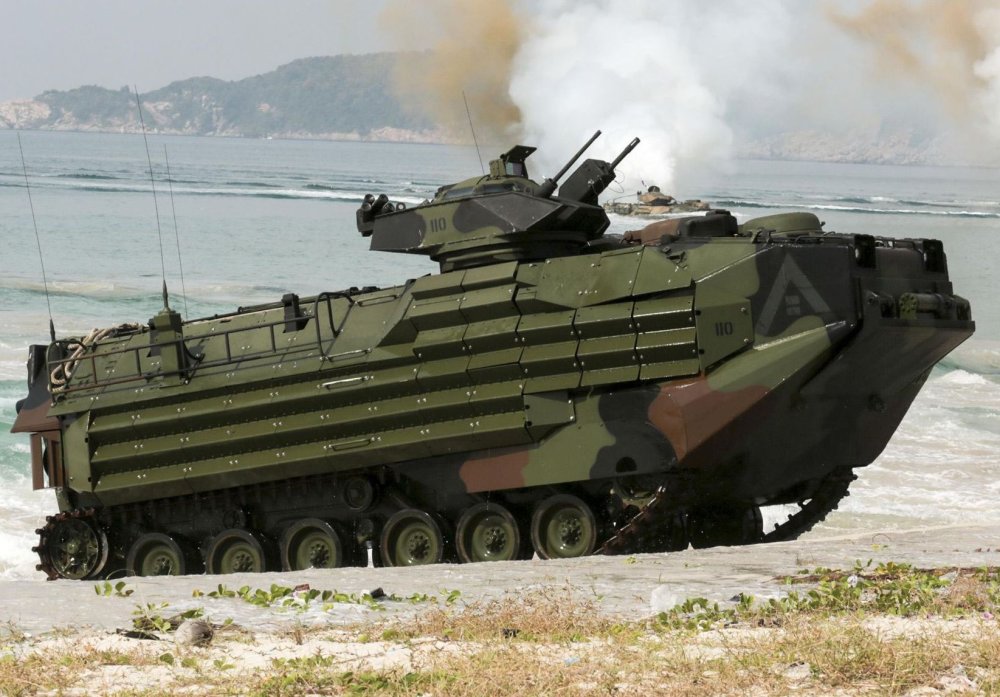 Kingman, Arizona) Navy and Marine Corps interest in up-gunning its new Amphibious Combat Vehicle with a stronger, longer-range 40mm cannon may have taken a step forward following a live-fire demonstration which blasted off the cannon -- destroying enemy pick-up trucks, aerial drones, groups of fighters and other metal targets.

Potential 40mm cannon counter-air drone attacks represents a significant step forward for vehicle-mounted cannons. It brings an ability to ID and destroy closer-in air targets such as approaching small drones or even low flying enemy helicopters; it can add an additional layer of combat tactics able to reinforce the existing Short Range Air Defense (SHORAD) program designed to fire Hellfire missiles and other weapons to hit higher-flying air-threats. Integrated sensor technology could, in some instances, share and pass off targets, enabling a vehicle-mounted cannon to expand its envelope beyond land-targets.

The new 40mm weapons configuration is aligned with an emerging Navy-Marine Corps amphibious assault strategy which, among other things, sees a possible need for extended penetration into land defenses after an initial beachhead is taken.

As a way to demonstrate and further explore the ACV Bushmaster Cannon’s attack flexibility, Northrop Grumman and BAE Systems demonstrated the 40mm gun firing on the move, hitting and exploding white pick-up truck targets, drones and fixed structures on the other side of an Arizona desert valley.

This desired flexibility, fortified by added land attack firepower, also complements other elements of the Corps’ newer, more "dispersed" amphibious assault strategy; if amphibious incursions occur in narrow, more spread-apart scenarios, landing forces will potentially need to engage in more land-fighting without large numbers of forces nearby. They will likely rely more upon air support, long-range fires and "networked" intelligence from other ISR nodes, command and control ships or elements of the force - to find and exploit landing areas most advantageous the the attacking force.

The new ACV uses ocean water to cool the engine so as to enable it to carry up to 200 gallons of fuel - enough for a longer 365-mile mission. While the new ACV can travel roughly 13 miles through water, at about six knots, from ship to shore, it can hit speeds of 60mph on land for hundreds of miles inland. Northrop’s development of the 40mm cannon is, to a large extent, intended to support this strategy, as its longer range and ammunition are designed to support deeper land-attack penetration possibilities.

The Northrop-BAE teaming arrangement is now finalizing gun-turret integration to further prepare the weapon for combat in the next several years. Corps developers cite sensor-weapons-gun alignment as a key emphasis in their development of the ACV; its increased landwar speed maneuverability compared with the current AAV are enhanced by “a precision weapons station for enhanced lethality, and a robust swim capability to operate within the littorals,” Col. Kirk Mullins, ACV 1.1 Program Manager, Advanced Amphibious Assault, Program Executive Officer Land Systems.

“The vehicle is designed to have a turret superstructure that is reinforced in the base design. This is the culmination of turret-integration analysis,” John Swift, Director of Amphibious Warfare, told Warrior Maven in an interview.

Northrop weapons developers explain that the 40mm cannon can, due to the vehicle’s turret and fire control configuration, easily swap out the 30mm cannon barrel for a 40mm barrel without any technical difficulty or significant alterations.

“The ACV is not maintenance intensive because of its increased reliability, and it also provides greater protection against threats we encounter on the battlefield,” Mullins added.

Some of the 40mm demonstration firing, Swift said, included “networked” attacks upon groups of enemy fighters using nearby RPGs. The RPG fire, he explained, was connected to the base vehicle to reinforce destructive power by hitting the target from horizontal and vertical angles. Targets were passed off, in some cases, by using a laser rangefinder. This technology fires a laser beam at a target, traveling at the speed of light. Given that the speed of light is a known entity, it can mathematically be combined with the length of time it takes to travel to the target. Given these two established variables, algorithms can then calculate the exact distance, placing the round on a target.

Along with a larger, larger-range gun, Northrop is also working intensely on ammunition preparation - to include advanced airburst rounds, high-explosive rounds an emerging “proximity” rounds. Each of these rounds bring a new sphere of attack options for offensive operations, as they can detonate near or above a specific target. By exploding in a certain area, a proximity fuse can use a smart, pre-programmed fuse to destroy groups of enemy fighters or other “area” targets more difficult to hit with standard “point-detonate” rounds. Air burst rounds already exist, and Olson said Northrop is fast-tracking the development of proximity rounds

“We have been investing pretty heavily in our ammunition to further enhance the lethality of our systems. This includes the area of proximity fusing and the creation of on-board power and computing power to ID targets,” Olson said.

Along with efforts to upgrade its offensive fire-power, the Marine Corps has also been preparing to assess the vehicle’s ability to withstand attacks, by firing live weapons at its new Amphibious Combat Vehicle -- until the attacks achieve "total destruction." This is designed to prepare the vehicle for long-range, high-intensity land-attack missions emerging from an amphibious assault.

“We have an ongoing challenge in readiness, given the threats to amphibious forces,” Maj. Gen. David Coffman, Director of Naval Expeditionary Warfare, said in January at the Surface Naval Association Symposium.

Unlike existing tracked AAVs, the new ACVs are 8X8 wheeled vehicles engineered for greater speed, maneuverability and survivability on land. By removing the need for torsion bars, a wheeled-vehicle such as the ACV can build a v-shaped hull for additional protection, speed and combat durability, BAE Systems developers say.

"The Marine Corps went from tracked to wheeled because of advances in automotive technology," Swift said.

The new vehicle weighs 30-tons and has a digitized driver’s instrument panel. The existing new ACVs are armed with .50-Cal Machine Guns, and engineered with an unmanned turret that can integrate the 40mm gun. The new ACV also makes use of a stronger 700hp engine, compared to the AAVs 400hp engine.

A more dispersed amphibious attack force not only reduces vulnerability to enemy fire but can also use advanced C4ISR and networking to better identify key points of attack across a wider area.