Secret Weapon: How AI Will Help America Win a War in Space 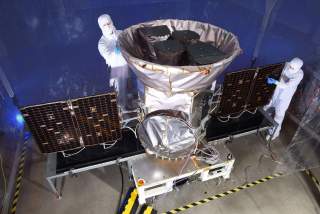 Hardening satellites will involve developing methods of allowing them to operate in an environment where there might be cyber and electronic warfare attacks This is an area, Bogdan explained, where AI and Modzy can make a difference; once algorithms are able to recognize and assimilate new anomalies and patterns of cyberattack, they are integrated by Machine Learning programs, therefore quickly expanding the extent of detectable cyberattacks.

“If you create a good enough set of databases where cyberthreats are, you can train your system to relate them to something in the past and build up knowledge of what cyber threats look like,” Bogdan said.

Additional options now in the earlier stages of technical and conceptual development include the creation of “smart satellites.” These would be integrated, AI-enabled satellite systems with on-board hardware and software such that real-time analytics and fast problem solving could be done in space -- before being sent to ground commanders.

“This will involve putting AI-enabled analytics in satellites themselves. You won’t need as many communications pipes. It would be somewhat similar to F-35 sensor fusion,” Bogdan explained. (Bogdan previously served as the Program Executive Officer for the Pentagon's F-35 program)