This Secret Weapon is How Napoleon Nearly Conquered Europe 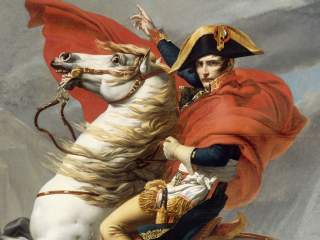 Most historians agree that Napoleon was not a great military innovator. Instead, he won his battles by brilliantly combining the innovations of others, such as Marshal de Broglie’s system of military divisions, Jean de Gribeauval’s standardized artillery, and the effective French infantry drill regulations of 1791. In this respect, Napoleon’s military ideas were in line with the general direction of European military thought in the early nineteenth century. However, Napoleon did innovate in one significant way: while during the eighteenth century most European cavalry had cast off their armor, Napoleon was a fanatic for heavy cavalry, and re-established a massive corps of armored men on horseback, his elite cuirassiers and carabiniers. This seemingly anachronistic development was a key part of his military legacy, and should be remembered as one of his lasting contributions to military science.

Napoleon considered heavy cavalry essential to achieving decisive military victories. “Without cavalry,” he held, “battles are without result.” His heavy cavalry was the ultimate shock weapon, intended to charge home and force the collapse of the enemy’s line of battle, much like medieval knights. Napoleon’s concept of employment for heavy cavalry remained consistent from his first effort to drill a heavy-cavalry force at the Camp of Bolougne in 1803 until his final defeat at Waterloo in 1815, where his cavalry force of 13,000 men and horses included over 8,000 armored heavy cavalry. Napoleon invariably formed his heavy cavalry into a mass “reserve” under his immediate control. He typically committed it in times of desperate need or to inflict a final blow on a buckling enemy, where it reaped an outsized share of military glory (despite relying on infantry support to succeed). Napoleon used his heavy cavalry liberally, recognizing that its charges would both inflict and receive massive casualties. This pursuit of the knockout blow at any cost was a significant break from the limited wars of the eighteenth century, where marshals typically sought to avoid casualties.

Heavy cavalry served Napoleon well throughout his reign. He inherited a single regiment of cuirassiers in 1799, and expanded the corps to twelve regiments by 1804. Napoleon first committed his reorganized and re-armored cuirassiers to combat against the Austrians at the battle of Austerlitz in 1805. They impressed him, and after Austerlitz he proclaimed armored cavalry “more useful than other cavalry.” Napoleon credited a timely charge by the cuirassiers for his victory over Prussia at Jena in 1806. French cuirassiers also played key roles in the battles of Eylau and Friedland in 1807. And 4,000 cuirassiers famously halted an Austrian advance at Wagram in 1809, earning laurels in what historian Andrew Roberts calls “the last decisive use of cavalry on a Napoleonic battlefield.”

Although artillery became increasingly dominant on ever-more-crowded battlefields after 1809, Napoleon’s heavy cavalry mania was undiminished. Two regiments of Carabiniers-à-Cheval received cuirasses and neoclassical helmets in 1809, and the French heavy cavalry corps reached a peak strength of sixteen armored cavalry regiments in September 1810, with an average strength of over 800 troopers per regiment. The cuirassiers and carabiniers fought valiantly at Borodino in 1812, where they seized a poorly entrenched Russian redoubt, but that battle failed to turn the tide of the campaign. The Grande Armée’s subsequent retreat from Russia marked the end of the heavy-cavalry corps as a decisive force. “The horses of the cuirassiers,” recalled the French cavalry general Étienne de Nansouty, “not, unfortunately, being able to sustain themselves on their patriotism, fell down by the roadside and died.” Napoleon would never be happy with their remounts.

The Armored Cavalryman as a Weapons System

Napoleon’s heavy cavalry were defined by their armor. The cuirassier and carabinier regiments received the strongest conscripts and the largest horses—and least 160 centimeters-tall—in order to bear the weight of their 16-pound cuirasses—comprised of both breastplate and backplate—and iron helmets. Napoleonic musketry was inaccurate and had a low rate of fire, so cuirasses provided significant protection for cavalry swiftly charging infantry. While the famous cannonball-punctured cuirass of Carabinier Antoine Faveau in the Musée de l’Armée is a grim reminder of how artillery literally blew Napoleonic cavalry off the battlefield, cuirasses probably stopped musket fire as often as they yielded to it.

It is more challenging to evaluate how useful the cuirass was in melee, because contemporary sources disagree about the risk posed by torso wounds from edged weapons, which the cuirass theoretically mitigated. On the one hand, many Napoleonic beau sabreurs survived repeated sword and lance wounds to their extremities, suggesting protection from edged weapons was almost superfluous. On the other hand, being stabbed in the chest or belly is exceptionally grave and often fatal, so the number of combat deaths resulting from torso wounds among unarmored troops may be underrated due to survivorship bias. An indicator of the benefit armor conferred is that even back plates saves many lives in melee, according to a famous statistic: when French cuirassiers met Austrian cuirassiers, who did not wear backplates, at the battle of Eckmühl in 1809, “the proportion of Austrians wounded and killed amounted respectively to eight and thirteen for one Frenchman.”

Above all, the armor gave its wearer psychological benefits. “To engage with infantry,” Napoleon‘s Marshal Auguste de Marmont held, “heavy and iron-clad cavalry is necessary, which is sufficiently protected and sheltered from the fire, so as to confront it fearlessly.” The idea that cuirassiers were braver remained the conventional military wisdom in France for a century after Napoleon’s reign. Ardant du Picq, the famous advocate of the importance of moral force in battle, wrote in his 1870 book Battle Studies that cuirassiers “alone, in all history, have charged and do charge to the end.” He considered armored cavalry “clearly required for moral reasons.” Battle Studies remained a key French military textbook through Great War, perhaps explaining in part why French cuirassiers only gave up their cuirasses on the Western Front October 1915. By then the moral benefits conferred by armor had diminished, and the Medievalist Bashford Dean, who was commissioned by the U.S. Army to design neo-Gothic armor for trench warfare, concluded that despite its utility, armor “finds little favor with the soldier” who would rather “take his chances.”

Just as important as his cuirass was the heavy cavalryman’s sword. While heavy cavalry intermittently carried muskets and pistols, their firearms were auxiliary weapons, and the sword was the weapon they employed when charging. The French heavy cavalry sword introduced in 1801 was 97 centimeters long, and despite being uncomfortably heavy, gave Napoleon’s armored cavalry a lethal forward reach. Like a lance, it was meant to stab with the tip, not to slash with the blade. As Napoleon reminded his cuirassiers before they charged at Wagram, “Ne sabrez pas! Pointez! Pointez!” (Don’t slash! Use the points of your swords! The points!).

Indeed, the heavy cavalry sword was so long that in some ways Napoleon’s swordsmiths had invented a sword that was, in practice, a lance. Napoleon probably did not mind this, as he was influenced by M. de Lessac’s 1783 book De l’esprit militaire, which argued that the lance was the most efficient shock weapon for cavalry. In 1811, Napoleon created six regiments of unarmored lancers, planning to brigade them with the heavy cavalry. They proved effective anti-infantry troops and complemented the heavy cavalry well. Indeed, after Waterloo, the lance underwent a renaissance, with prominent military commentators such as Auguste de Marmont and Antoine-Henri Jomini arguing the lance was a superior anti-infantry weapon for cavalry and should be widely readopted.

Napoleon, however, always preferred armored heavy cavalry to lancers. He considered his armored cuirassiers “the best cavalry in the world” for attacking infantry.

Not everyone agreed with Napoleon’s assessment that armored cavalry were a battle-winning force. Capt. Louis Nolan, the British military writer and cavalryman famous for his role in the Charge of the Light Brigade, quipped in his influential 1851 treatise Cavalry: Its History and Tactics that "Armour protects the wearer, and prevents him from injuring others,” quoting an unnamed Austrian emperor. While at their best they were devastating shock weapons, heavy cavalry overburdened their horses with heavy cuirasses, and thus were ponderous and vulnerable. (This was why armored lancers fared poorly: the lancer relied on speed and momentum to deliver shock to the enemy, but armored cavalry was heavier and slower.) Other military commentators considered armored cavalry a vain throwback. The great Prussian military theorist Carl von Clausewitz acerbically wrote in his classic On War that Napoleon had no trouble winning battles without heavy cavalry, but that without heavy cavalry Napoleon typically captured fewer trophies of war, and thus reaped less glory. “Victory alone is not everything,” Clausewitz wrote, poking fun at Bonaparte, “but is it not, after all, what really counts?” He predicted, correctly, that cavalry would become less common on future battlefields, and artillery more common. But that trend was challenging to identify during the Napoleonic wars themselves, and so in perhaps the ultimate vanity, Napoleon’s last military gambit was a desperate charge of 5,000 cuirassiers shouting “Vive l’Empreur!” at Waterloo in 1815. The cavalry were committed prematurely and failed to break the British line.