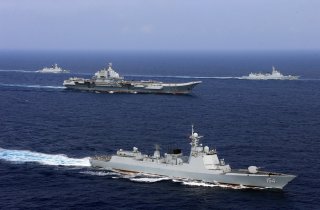 Navy Secretary Carlos Del Toro said he was not only worried about the size and technological sophistication of the growing Chinese Navy, but also by Beijing’s provocations, aggressive behavior, and overall action on the international stage.

“It’s not just ships and weapons that concern me,” Del Toro told a group of U.S. Navy Academy midshipmen in October, according to a transcript of the speech. “It’s what Beijing does as it strives to achieve leverage over its competitors. It uses every advantage in a coercive, extractive, and dangerously irresponsible manner.”

There is also the growth of China’s international footprint, as the People’s Liberation Army military base in Djibouti, Africa. The new base is nearby a critical U.S. presence in the region. The growing Chinese Navy could benefit further from additional bases in strategic locations. If the People’s Liberation Army Navy can dock ships at the Djibouti base, areas of the Middle East could become increasingly vulnerable to Chinese influence.