Secrets Revealed: Meet the Only (Russian) Cannon That Was Ever Fired in Space 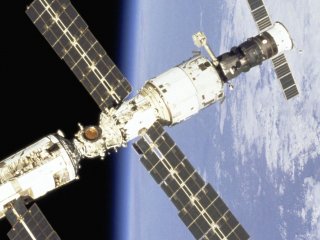 Key point: Moscow attached an AA gun to one of its space stations and tried it out. Today, Russia has anti-satellite missiles to take out objects in orbit.

In the 1970s, the Soviet Union shot an anti-aircraft cannon from a reconnaissance space station.

During the Cold War, space was nominally a neutral space, though both the United States and the Soviet Union had populated the empty area with reconnaissance satellites to photograph military installations, geographic hotspots, and capitals like Moscow and Washington D.C.—really anything on the surface of the Earth.

In 1974, the Salyut 3 was launched into orbit, where it hosted Soviet cosmonauts. Hopes were high for the Salyut 3 after the loss of its predecessor, Salyut 2. Salyut 2 had drifted out of control after reaching low-Earth and disintegrated upon reentry. But the Salyut 3 was no ordinary space station—it had a secret.

They decided to give the station some defenses—and installed a 23 millimeter anti-aircraft cannon to the station. Though the gun had a sighting contraption that could be used by cosmonauts from inside the station, the cannon itself was fixed in place outside, and thus immobile. In order to turn the cannon to face whatever was coming its way (alien or otherwise), the entire station had to be rotated.

Engineers were concerned about vibration caused by firing the gun. Excessive vibration could potentially damage the station and risk the lives of the cosmonauts onboard, so the first test fire was done remotely, when the station was unmanned.

In order to offset the effect the cannon would have on the station’s orbit, thrusters facing opposite the direction of fire were engaged during the test. Though sources disagree, the test was likely three bursts. The projectiles presumably burned up in Earth’s atmosphere upon reentry.

Space remains a contested environment, though the tools that countries could use to destroy satellites has changed. Rather than space-based anti-aircraft guns, countries like China and the United States employ anti-satellite missiles, or perhaps lasers.

In 2006, a ground-based laser that originated in China lit up several American satellites, demonstrating the ease with which satellites can be targeted. Though the satellites were apparently not damaged, alarm bells rang in the American defense community.

A year later, in 2007, China conducted an anti-satellite test on an old satellite. The satellite was struck by a kinetic kill vehicle—destroying the satellite and creating a giant cloud of over 3,000 pieces of debris. Some of those pieces are still in orbit and will remain in orbit for decades if not centuries to come.

Though there are no “Space Marines,” the area surrounding Earth will no doubt be contested during the next large-scale conflict.