See This Missile? It Might Be a Nuclear Weapons Killer. 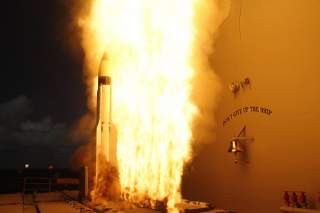 Although the Trump Missile Defense Review (MDR) includes aspirations to significantly improve missile defense beyond the Obama administration's missile defense plans and programs, the budget request to Congress revealed few moves to turn aspirations to reality. But one such step was to test the SM-3 Block IIA against an intercontinental-range target. Doing so deserves the bipartisan support of Congress.

While designed to significantly increase the defended area and help Japanese defense against a North Korean attack from intermediate-range ballistic missiles, it has become increasingly clear that the SM-3 Block IIA has the potential to intercept longer-range missiles of intercontinental range. But the U.S. should test the IIA variant against that threat set to glean critical data and demonstrate what has only been seen in simulations and models. This is what the Department of Defense wishes to do, and what Congress, until recently, directed them to do.

When Republicans had control of the House of Representatives, the House passed the FY2018 National Defense Authorization Act (NDAA) that included a provision that requires the U.S. test an SM-3 Block IIA against a simple ICBM by December 31, 2020. But with a change of leadership, the Democrat-controlled House passed the FY20 NDAA and the House Defense Appropriations Bill. Both recent House bills prevent the Department from testing the SM-3 Block IIA against an ICBM target. This should not be a partisan matter. The final bills that Congress will send to President Trump’s desk for his signature should support the test.

If the U.S. could demonstrate the SM-3 Block IIA against an ICBM, it could help in a few ways.

The U.S. would have the option to deploy it on U.S. soil to bolster protection of areas that could use an added layer of protection. Notably, GMD can defend the U.S. from ICBMs launched from anywhere on the planet. The number of ground-based interceptors (GBIs) planned for deployment shows that it is scaled to defend against a handful of ICBMs, which means as it is currently constituted it is best suited to intercept the kinds of missile threats attacks that are most likely to come from rogue states like North Korea.

GMD has several unique qualities, including its vast swaths of coverage and its permanence which means it provides 24-7 coverage. Its most recent test demonstrated the greatest sophistication to date. Known by the initialism FTG-11 (Flight Test Ground-based Interceptor 11), this complex, first-ever salvo test resulted in two GBIs successfully destroying their target within minutes.

Adding different interceptors in certain parts of the country could complement the GMD system. The concept of deploying other interceptors originally designed to intercept missiles with less than ICBM range to layer with GMD is called the “underlay.” An underlay could, in the words of the Missile Defense Review (MDR) “ease the burden on the GBI system and provide continuous protection for the U.S. homeland against rogue states' long-range missile capabilities." The concept of the underlay, like several initiatives in the MDR, is still notional.

And the SM-3 Block IIA isn’t the only system that the U.S. could potentially utilize in the event of certain missile attacks. Nor is this the first time the U.S. has flirted with the surge idea. Back in 2009, amidst North Korean missile provocations, Defense Secretary Robert Gates announced the U.S. was beefing up its defenses including re-deploying THAAD to Hawaii. Fast forward to the Trump MDR, “For example, Patriot and THAAD systems, and multi-mission Aegis BMD-capable ships armed with the SM-3 Blk IIA interceptor will be moved into position quickly in a crisis to strengthen the defense of the homeland against rogue state missile threats.” The U.S. has options.

Timing-wise, it makes sense to demonstrate a renewed commitment to augmenting U.S. missile defenses. Despite the Trump administration’s efforts to mitigate the threat from North Korean nuclear missiles through negotiations, the North Koreans have not dismantled their nuclear program, have resumed short-range missile tests, and have ceased working-level negotiations.

As rightly stated in the Trump MDR, missile defense strengthens diplomacy. The more reliable the U.S. missile defense system is, the more empowered U.S. diplomats are to negotiate with the Kim regime. And as long as America's adversaries continue to improve, proliferate, and expand its missile forces, the United States must continually adapt, expand, and improve our defenses.

To intercept the highly sophisticated non-ballistic missile threats from China and Russia, the United States would have to leverage current technologies in new ways as well as build new interceptors and sensors altogether. But the threat from ballistic missiles from a variety of adversaries continues apace. The Pentagon has already invested $121 million in the SM-3 Block IIA program to evaluate its ability against an ICBM, as directed. It would be smart to see that that money is not wasted and that the clear opportunity to do good in the near term isn't either.

Rebeccah L. Heinrichs is a fellow at the Hudson Institute, specializing in missile defense and nuclear deterrence. Follow her on Twitter @RLHeinrichs.This first appeared in RealClearDefense here.