See This Picture? Some Consider This the 'Black Hole' Russian Submarine 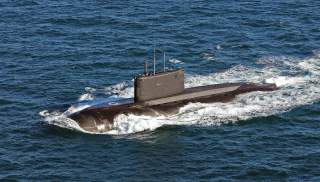 The mainstay of the Russian Navy’s conventionally powered fleet are Project 877–class submarines, known as the Kilo-class to NATO and the West. Nicknamed the “Black Hole” by many in the submarine community, the Improved Kilos are extremely quiet. The class has been built more or less continuously for thirty years, a testament to their effectiveness at sea.