See This Picture? This Was the U.S. Navy's World War II Battleship 'Drone' 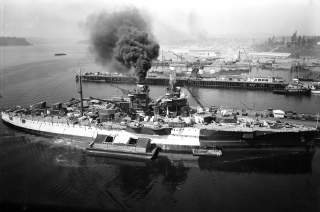 Key Point: Utah was the oldest battleship to serve in World War II, but not the oldest to serve as a battleship, an honor which goes to USS Arkansas. Her presence at Pearl Harbor is often forgotten because she had ceased to serve as a battleship at the time of the attack. However, her contribution to the preparedness of the Pacific Fleet was every bit as important as that of the other battleships of the line, and her sacrifice should be noted. Several relics of the ship adorn important government buildings in the state of Utah.

Just recently, the United States almost went to war over the downing of a drone along the Iranian border. This is not, strangely enough, the first time that an attack against the United States began with violence against a drone. On December 7, 1941, one of the first attacks conducted by Japanese aircraft was launched against the former battleship USS Utah, a radio-controlled target ship. Today, USS Utah remains at the bottom of Pearl Harbor, a memorial to those lost in the surprise attack.

Robert Farley, a frequent contributor to the National Interest,