See This Strange Looking 'New' A-10 Warthog? It Is Special for 1 Big Reason. 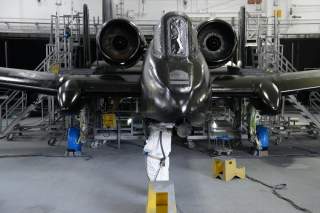 Workers at the Ogden Air Logistics Complex at Hill Air Force Base have installed the last of 173 new wings on A-10 Thunderbolt II aircraft, finalizing a project that started in 2011 with aircraft 80-0173.

The new wings are expected to last for up to 10,000 equivalent flight hours without a depot inspection. In addition, a better wire harness design was created for easier wing removal and to lessen the chance of damaging the wing during the process.

“From a warfighter point of view, bringing this program to a successful conclusion was a significant accomplishment for the entire enterprise team,” said Stephen Zaiser, 571st AXMS director.

Working on an aircraft that has been flying for nearly 40 years wasn’t without challenges. The modifications included having to make new parts for the fuselage and having to bring other A-10 parts up from the 309th Aerospace Maintenance and Regeneration Group at Davis-Monthan Air Force Base, Arizona.

“At the end of the program, making sure we had all the pieces and parts that we needed to make that happen required a really significant team effort,” Zaiser said. “I think the fact that we produced the aircraft so successfully is a testament to the whole team, the special program office, Boeing and others that were a part of making it all work.”

Lt. Col. Ryan Richardson, 514th Flight Test Squadron commander and A-10 test pilot, flew the functional check flight on the last A-10 to receive the new wings to deem the aircraft airworthy.

“It flew great and passed all the FCF checks,” Richardson said. “It’s unusual to have an airplane in production for as long as this one was and have it come out and fly as well as this one did.”

Introduced into the U.S. Air Force (USAF) aircraft inventory in 1976, the venerable A-10 is the only production-built aircraft for close air support (CAS). The aircraft was made to fly close to the ground in support of friendly ground troops, drop heavy loads of weapons, attacks armored vehicles and tanks, and can be called in to attack enemy ground forces.

With heavy stresses put on the wings over the weapon system’s lifetime and with its full-service life still unknown, the Air Force decided to replace some of the fleet’s wings in order for the weapon system to remain airworthy.

In 2007, Boeing was awarded a $1.1 billion contract to build replacement wings at its Macon, Georgia, plant that will allow the aircraft to continue flying into the late 2030s.

“The A-10 Special Program Office, in partnership with the Ogden ALC, is poised to keep the aircraft flying for the foreseeable future,” said Michael Hackett, A-10 SPO chief engineer.

Noteworthy, as we have previously reported, the USAF is getting ready for the next A-10 Warthog contract to re-wing more of the CAS aircraft.

USAF spokeswoman Ann Stefanek said on Apr. 1, 2019 that the next contract for the A-10-Thunderbolt II Advanced-Wing Continuation Kit (ATTACK) is going through source selection and is expected to be awarded this fall. She added that the service has $267 million set aside to buy “about 20 total wings.”

The service last year said it had begun searching for a new company to rebuild wings on the A-10 after ending its arrangement with Boeing Co., even though officials have not committed to re-winging the entire fleet. USAF has 281 A-10s in its inventory, but it has decided to maintain wings for only six of its nine A-10 combat squadrons through roughly 2032.