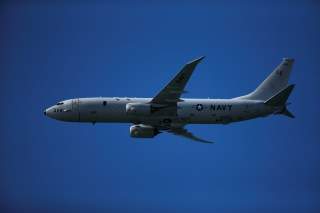 Moscow claims 26 foreign surveillance aircraft have been spotted by its forces near its airspace over the past seven days.​

Russia says it scrambled a Sukhoi Su-27 Flanker fighter jet to intercept a US Navy P-8A Poseidon that was flying close to the annexed territory of Crimea.

As the videos in this post show the Flanker pilot used his mobile phone to record footage of the latest close encounter between US and Russia aircraft.

(This first appeared earlier in 2019 and is being republished due to reader interest.)

The Su-27 pilot is seen holding his phone in a reflection as he films the P-8 flying above his Flanker and then pans down to show land and water below.

Russia’s defense ministry said that the Poseidon changed course when it was intercepted by the Flanker.

The US military has not yet commented on the claims.

The Russian defense ministry said: “An Su-27 fighter jet as part of the Southern Military District’s air defenses was scrambled to intercept the target.

“The crew flew the aircraft at a safe distance to the aerial target and identified it as a US P-8A Poseidon reconnaissance jet.”

The statement added that the US plane “immediately changed the direction of its flight to fly away from the Russian state border”.

Currently, US forces are participating in NATO’s Sea Breeze naval drills in the Black Sea.

The Russian Navy has its own “combat training” exercises in the Black Sea, reported Moscow media.

As reported by Mirror, the Russian military newspaper Red Star claims Kremlin warplanes have been scrambled three times in the past week “to block foreign aircraft from illegally entering Russian airspace”.

Moscow claims 26 foreign surveillance aircraft have been spotted by its forces near its airspace over the past seven days.

Crimea is a disputed territory after Russia annexed the peninsula from Ukraine in 2014 during the crisis in the former Soviet republic.

Russia’s control of Crimea, where its Black Sea Fleet is based, means it is able to control shipping flows through the Kerch Strait.

In May last year, Putin opened a bridge between the Russian mainland and Crimea, tightening Moscow’s hold over the territory.

Moscow has backed a pro-Russia insurgency in eastern Ukraine in an armed conflict that has killed thousands.

Britain’s Foreign & Commonwealth Office currently advises against all travel to Crimea, in addition to Donetsk oblast and Luhansk oblast, where fighting between Ukrainian forces and Russian-backed separatists has raged since April 2014.