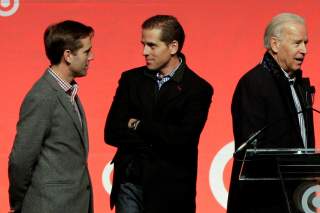 West Virginia Sen. Joe Manchin said Wednesday that Hunter Biden is a relevant witness for the Trump impeachment trial, making him the first Senate Democrat to suggest he would support calling the former vice president’s son as a witness at the trial.

“You know, I think so. I really do,” said Manchin.

He added that he believes Biden can clear himself of wrongdoing if he testifies.

“I don’t have a problem there, because this is why we are where we are. Now, I think that he can clear himself, what I know and what I’ve heard.”

Republicans supporters of Trump have questioned Biden’s work for Burisma Holdings, a Ukrainian energy firm. Biden joined the firm in 2014, at around the same time that his father was tapped as the Obama administration’s point man on Ukraine issues.

Democrats have largely opposed having Biden called as a witness, saying he is not relevant to the case against Trump.

.@WillieGeist asks @Sen_JoeManchin if Hunter Biden is a 'relevant witness.' Sen. Manchin responds: "I think so; I really do." pic.twitter.com/ZESiUMWTWc

The Senate could vote as soon as this week on whether to call witnesses and introduce evidence at Trump’s trial. The prospect of witnesses grew more likely after The New York Times reported that former national security adviser John Bolton said in a book manuscript that he spoke with Trump about a freeze on military aid to Ukraine.

Democrats want to call Bolton as a witness, but at least four Republicans would have to vote to do so. Sens. Mitt Romney and Susan Collins, moderate Republicans, said Monday that Bolton’s claims make them more likely to vote to call witnesses.

Sen. Lindsey Graham, a Republican ally of Trump, said Tuesday that if Bolton is called as a witness, then Biden would be as well. Senate Minority Leader Chuck Schumer shot down the idea, telling reporters he is “not bargaining” with Republicans on a deal to trade Bolton’s testimony for Biden’s.