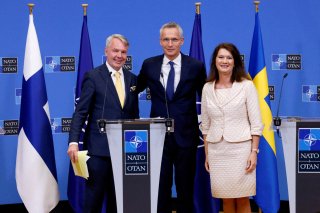 The U.S. Senate voted on Wednesday to ratify Sweden and Finland’s accession to the North Atlantic Treaty Organization (NATO), a widely expected step that moves the two Scandinavian nations one step closer to inclusion in the thirty-nation military alliance.

Karin Olofsdotter and Mikko Hautala, the Swedish and Finnish ambassadors to the United States, watched the Senate’s vote from the gallery. Although a two-thirds majority was required to approve the two nations’ entry into the treaty, the “yes” votes easily crossed this threshold, and the measure was ultimately approved with ninety-five votes in favor and one against.

Sen. Josh Hawley (R-MO), the only member of the Senate to vote against the expansion, explained in oral remarks before the vote that he opposed further U.S. commitments in Europe in favor of diverting further resources toward confronting a rising China in the Indo-Pacific region.

“We can do more in Europe…or do what we need to do to deter Asia and China,” Hawley claimed. “We cannot do both.”

Hawley’s position was roundly criticized by both Democrats and Republicans, who argued that both Finland and Sweden would contribute substantially to NATO and would further strengthen the alliance without requiring any further commitment of strength from Washington.

“If anything, welcoming Finland and Sweden to NATO will reduce the burden on the United States,” Sen. Bob Menendez (D-NJ) claimed in his floor remarks. “There is tremendous urgency and a strong case for inviting these countries, and we must act now.”

Senate Minority Leader Mitch McConnell (R-KY) also offered an implicit rebuke of Hawley’s position, urging before the vote that the outcome be unanimous as a demonstration of the United States’ commitment to NATO and to European security.

“If any senator is looking for a defensible excuse to vote no, I wish them good luck,” McConnell said.

Prior to the final approval, Senators voted down two proposed amendments introduced by Sens. Rand Paul (R-KY) and Dan Sullivan (R-AK), which would have respectively required a caveat that only Congress could declare war—essentially rendering Article 5 of the North Atlantic Treaty, which guarantees the bloc’s collective defense and is widely described as the backbone of the alliance, optional—and mandating that all NATO nations spend at least 2 percent of their gross domestic product on defense, which all NATO nations have formally committed to doing but few have actually done.

Following Washington’s agreement, both Stockholm and Helsinki must also receive approval from all other members of the alliance. This caveat gives other NATO members a degree of leverage over would-be new members and prompted Turkey to block their applications over a political dispute concerning the two nations’ alleged support for Kurdish anti-government militants in southern Turkey and northern Syria. Following an apparent resolution of the Kurdish issue, Ankara agreed to approve the two nations’ accession but warned that it could reverse its decision later if the two countries were perceived to have violated the agreement.